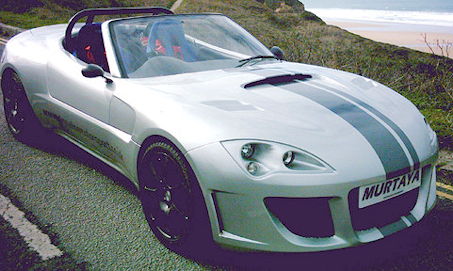 Adrenaline Motorsport Limited was a British manufacturer of sports automobiles and kits .

Adrenaline: The model was the Murtaya . The name was composed of parts of the surnames of three company founders. This was a two-seat roadster . A four - cylinder boxer engine from the Subaru Impreza powered the vehicles. From this model created between 2007 and 2009 about 45 vehicles. Murtaya Sports Cars continued its production from 2010 under its own brand name.

From 2006, Adrenaline Motorsport continued production of the Roadsport and RSR models produced by Minari Engineering in 2000 while retaining the brand name Minari . These were also Roadster, where the sports version RSR was delivered without a windshield . Peninsula Sportscars continues production since 2008. In total, about 130 road sports and 4 RSR have been created at the three manufacturers so far .

Minari Clubsport 1990- Roadster with body made of fiberglass . Four - cylinder boxer engines from the Alfa Romeo Alfasud and Alfa Romeo 33 drive the vehicles.

Toniq: Between 2006 and 2009 was R . This Lotus Seven- style vehicle was originally designed by Stuart Taylor Motorsport . Toniq Sportscars continues production since 2009.