Ruston & Hornsby, later known as Ruston, was an industrial equipment manufacturer in Lincoln, England, the company's history going back to 1840. The company is best known as a manufacturer of narrow and standard gauge diesel locomotives and also of steam shovels. Other products included cars, steam locomotives and a range of internal combustion engines, and later gas turbines. The company is now part of the Siemens group of Germany.

The original company was Proctor and Burton established in 1840, operating as millwrights and engineers. They became Ruston, Proctor and Company in 1857 when Joseph Ruston joined them, acquiring limited liability status in 1899. From 1866 they built a number of four and six-coupled tank locomotives, one of which was sent to the Paris Exhibition in 1867. In 1868 they built five 0-6-0 tank engines for the Great Eastern Railway to the design of Samuel W. Johnson. Three of these were converted to crane tanks, two of which lasted until 1952, aged eighty-four. Among the company's output were sixteen for Argentina and some for T. A. Walker, the contractor building the Manchester Ship Canal.

During the First World War, Ruston assisted in the war effort, producing some of the very first tanks and a number of aircraft, notably the Sopwith Camel.

On 11 September 1918, the company amalgamated with Richard Hornsby & Sons of Grantham to become Ruston and Hornsby Ltd (R&H). Hornsby was the world leader in heavy oil engines, having been building them since 1891, a full eight years before Rudolph Diesel's engine was produced commercially.

Ruston built oil and diesel engines in sizes from a few HP up to large industrial engines. Several R&H engines are on display at the Anson Engine Museum at Poynton nr Manchester. Also at Internal Fire - Museum of Power, Tanygroes near Cardigan. The company also diversified into the manufacture of petrol engines, again from around 1.5 hp upwards, some of these designs were later manufactured under licence by The Wolseley Sheep Shearing Machine Company.

After World War I the company attempted to diversify and one outcome was the Ruston-Hornsby car. Two versions were made, a 15.9 hp with a Dorman 2614 cc engine and a larger 20 hp model with 3308 cc engine of their own manufacture. The cars were however very heavy, being built on a 9-inch chassis, and extremely expensive – the cheapest was around £440 and the most expensive nearly £1000, and within a few years other makers were selling similar vehicles that weighed only 3/4 ton and cost around £120 - £200 – and never reached the hoped-for production volumes. About 1500 were made between 1919 and 1924 two of which are still retained by Siemens on the Lincoln site, one is fully restored in running/driving condition while the second example is still awaiting attention.

The R-H car was developed by the Chief Engineer, Edward Boughton, who joined the company in 1916 after helping to develop the tank. Later he would start the Automotive Products Group (APG) in Leamington Spa in 1920 which made Borg & Beck clutches, Lockheed hydraulic brakes, and Purolator fuel filters.

In World War 1, the company made around 2750 aeroplanes and 3000 aero engines. The 1000th Sopwith Camel (B7380), built at the plant in 1917, was named the Wings of Horus. The company built around 1,600 Sopwith Camels, 250 Sopwith 1½ Strutters, and 200 Royal Aircraft Factory B.E.2s. The company, as Ruston & Proctor, was the largest British builder of aero-engines in the War, and built the largest bomb of the war. One of the directors, Frederick Howard Livens, had a son who was an army officer on the front line. Captain William Howard Livens was sent to Lincoln, where he developed the Livens Projector and the Livens Large Gallery Flame Projector.

In 1919, Colonel J.S. Ruston was inspired to create a garden suburb in Lincoln – the Swanpool Garden Suburb. His vision was to provide affordable houses for his workers, with easy access to healthy outdoor recreation, such as a pleasure ground, cricket ground and swimming baths. Ruston purchased 25 acres of the Boultham Hall estate and established the Swanpool Co-operative Society. Architects Hennell and James of London created the designs for the houses, which were built between April 1919 and September 1920. The vision for the new suburb included a technical institute, church and schools. After running into financial difficulties the development was sold in 1925 to Swanpool Garden Suburb Ltd, a private company, but only 113 of the planned 2–3000 houses had been constructed and no more were built.

In September 1944, when the German Wehrmacht OB West headquarters at Saint-Germain-en-Laye (near Paris) were captured, previously commanded by Field Marshal Günther von Kluge (from 2 July 1944), they were found to be powered by Ruston diesel engines.

It built the first prototype of the Valiant tank in 1944. The Grantham site built the Matilda II tank. 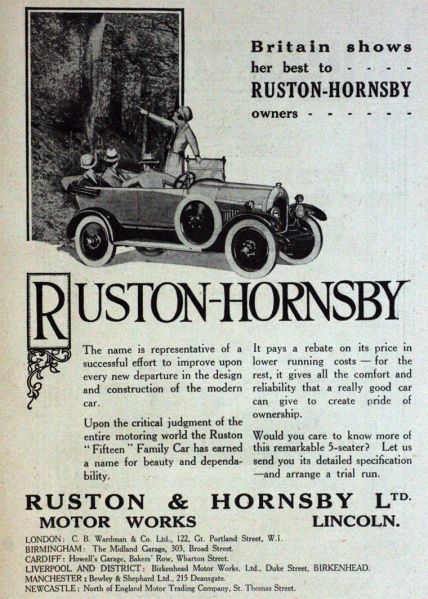