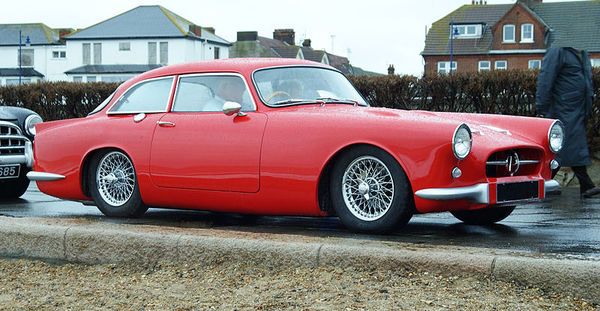 The Peerless was a British car made by Peerless Cars Ltd. of Slough, Berkshire, between 1957 and 1960, when the company failed. The company was resurrected by one of the original founders, Bernie Rodger as Bernard Roger Developments Ltd and marketed as the Warwick from a base in Colnbrook, Buckinghamshire, between 1960 and 1962.

During the 1950s, several British concerns developed and marketed specialist sports cars using proprietary engines, transmissions and other components, but there was a dearth of closed coupes. The Peerless project of 1957 set out to fill this gap. Conceived by John Gordon and Jimmy Byrnes, who owned Peerless Motors Ltd., of Slough, and designed by Bernie Rodger, this new car used a multi-tube chassis frame (conventional enough for the period), and Triumph T R 3 mechanicals (which were very popular), but combined them all in a close-coupled four-seater coupe style.

Not only was the Peerless 'different' in its layout and its accommodation, but it also tried to be different in its mechanical details. The TR3 engine and transmission was matched to TR3 front suspension, but at the rear Rodger provided a De Dion suspension system, in which springing and location was by half-elliptic leaf springs.
The bodyshell, a two-door coupe, was in glass-fibre, and the assembly factory was in Slough, not far from London's Heathrow airport. (The prototype, incidentally, was panelled in light-alloy, but this was not considered practical for series production).
The Peerless had a good reception in 1958, when sales began, for what was basically a standard car was entered for the Le Mans 24 Hour race, where it was driven by Peter Jopp and Phil Crabb. It performed with great reliability throughout, and even though it failed to qualify over the minimum distance, it was still an impressive show. In spite of not qualifying, the car completed 2007 miles, and was the 16th fastest car at the finish.
After this, more than 250 cars were sold in the next full year, which was encouraging, if not as many as the car's sponsors had hoped, and by the end of 1959 the finances of the firm were in a somewhat rocky state. The Peerless's problem was that it looked like a GT car, and was adequately fast, but it was little more refined than any glass-fibre bodied 'special' with such an unforgivingly 'basic' type of frame.
By 1960, therefore, Peerless was forced to close down, and the factory at Slough, which had always been too large for the activity achieved, had to be abandoned. It was About 325 were made.This , however was not the end of the model as a design, for Bernie Rodger took over the design and recommenced production on a more modest scale, later in 1960, with the car now known as the Warwick GT. This car does not truly belong to the period covered in this volume, and in any case was finally out of production in 1962.

Bernie Rodger restarted production of the car as the Warwick with minor changes to the appearance, a one-piece forward hingeing front end, a stiffer space-frame chassis and a revised dashboard. Although listed from 1960–62, only about 40 are thought to have been produced.

John Gordon, together with Jim Keeble (who had previously inserted a Buick V-8 engine into a Peerless), subsequently used the Peerless space-frame as the basis for a Chevrolet-powered car with Giugiaro-designed, Bertone-built bodywork, initially shown in 1960 as the Gordon GT, and which eventually reached production in 1964 as the Gordon-Keeble.