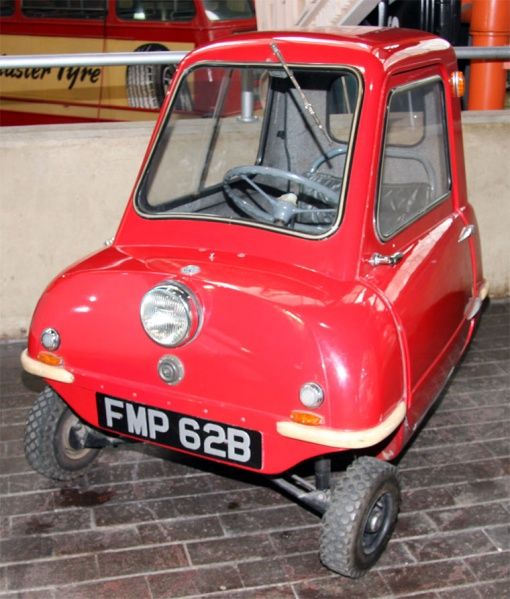 The Peel Engineering Company was a manufacturing company based on the Isle of Man that primarily made fibreglass boats through its subsidiary company West Marine Ltd and fairings for motorcycles. They were also responsible for the Peel Manxcar, Peel P50, and Peel Trident microcars, in addition to the Peel Viking Sport and prototype GRP Minis for BMC. These models constitute the only automobiles manufactured on the Isle of Man; the company halted their manufacture in 1969.

The Peel P50 was once in the Guinness record as the world's smallest production car, it has been replaced by the Wind Up.

The Peel P50 is a single-seat light vehicle manufactured by Peel Engineering Company on the Isle of Man .

The three-wheeled vehicle has a rear-wheel drive chain, a three-speed transmission without reverse gear, wishbone front, a rear swing arm, coil springs, and operated with cable brakes. The tank holds about 8 liters of 1:25 mixture. The maximum speed is given at about 70 km / h. The Peel Engineering Limited and Bambycars make replicas of other dimensions and other engines. Compared to the first model from 1961 part, the handle was removed at the rear of the car and the drive has a reverse gear. The EU-wide road legal registration as a light vehicle limits its maximum speed to 45 km / h.The P50 has been in use since 2008 by Peel Engineering Ltd. in Sidcup again with a 45-cc petrol four-stroke engine launched. The electric motor version is powered by four 12-volt batteries.In Gainsborough , the company founded in 2011 Bambycars manufactures its version Bamby P50 . The vehicle has a four-stroke engine with 50 cc and a power of 3.3 hp. It is a so-called horizontal motor (System Honda) with centrifugal clutch and the automatic transmission with an integrated reverse speed ratio., 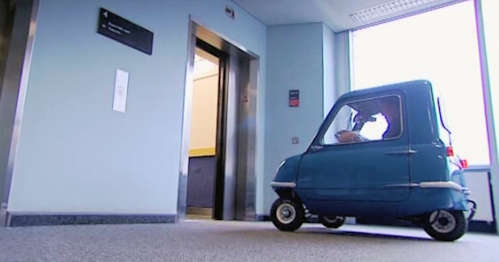 In the tenth season episode 3 of Top Gear Jeremy Clarkson tested the practicality of the highly-smoking Peel P50. Among other things, he drove to the broadcasting center of the BBC, crossed the corridors of an open-plan office, used the elevator and, still sitting at the wheel of the car, attended a (staged) staff seminar on "Environmentally Conscious Behavior in BBC's Everyday Work".

The Peel Trident is a light vehicle manufactured by the Peel Engineering Company on the Isle of Man and is the successor to the Peel P50 . The 1964 published, three-wheeled micro car for two people. At the request but was also available the 190-centimeter-long vehicle as singles. By means of an engine with 50 cubic centimeters, the Trident reached a top speed of 45 km / h.