Ogle Design is a British design consultancy company, founded in 1954 by David Ogle, based in Letchworth, Hertfordshire. 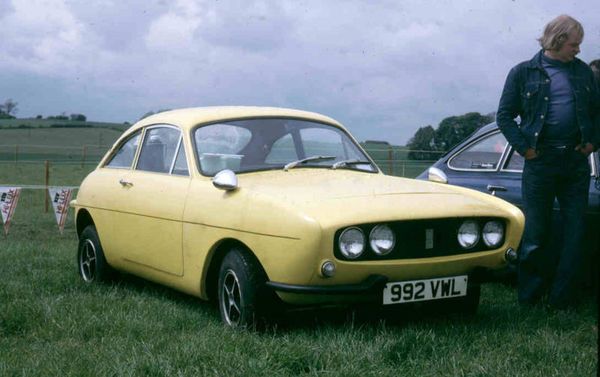 The initiative for the car went back to the British cigarette manufacturer WO Wills, who wanted to use the car for advertising purposes for its new cigarette brand Sotheby .The first vehicle was manufactured in 1971. It was initially painted blue and wore gold stripes. This corresponded to the color of the cigarette brand Sotheby . When the cigarette could not prevail on the market, the car received the colors of - also belonging to the Wills Group - Embassy brand , with the British Formula 1 team Hill advertised. The then white and red painted car was called Embassy Ogle . The first car was destroyed in a traffic accident.

In 1973, a second copy was created, which now used the platform of the Aston Martin V8 I (which was essentially identical to that of the Aston Martin DBS V8). The car had a manual transmission and had a red livery with a green roof. The price of the car was priced at £ 28,000, three and a half times that of a factory-built Aston Martin V8. The vehicle still exists today.

The car was based on the chassis of the Aston Martin DBS V8 , whose drive technology he also used. The body design came from Ogle's chief designer Tom Karen . The Sotheby Special was designed as a three-seat coupe; the third seat was installed behind the front seats transverse to the direction of travel. He wore folding headlights and a generously glazed passenger compartment. The above the rear wheel running upwards, in the rear section passing waistline was a commonly perceived as elegant design feature, the 1975 Leyland Princess was overtly copied. The most striking detail of the Ogle coupe was 22 round taillights: two superimposed horizontal rows of round lights. Four flashing lights were installed on each side, which illuminated one after the other from the inside to the outside. A similar gimmick already had the Ford Thunderbird of the fifth generation, the so-called Glamorbirds of 1967. The numerous brake lights changed their luminosity depending on the intensity with which the driver braked.

Made in greater numbers was the 1962 SX1000 based on the Mini. The first cars were built by grafting the Ogle glass fibre body to a customer supplied Mini. The conversion cost £550 plus the customer supplied base car. Later in 1962, complete cars became available with the 997 cc Cooper version costing £1176. Any of the Mini engines could be specified up to the Mini Cooper S unit which topped out at 110 mph (180 km/h). It is thought that 66 were made. Following David Ogle's death, it was decided to cease car production with the remaining parts being used up. A batch intended for the United States were converted to right hand drive and sold onto the home market. It is thought the last one left the factory as late as 1964. The moulds were sold in 1966 to Norman Fletcher, a boat builder in West Bromwich, West Midlands, who exhibited a Fletcher GT at the 1967 Racing Car Show.

The final car was the SX250, an updated Daimler Dart built in 1962. Two were made but Daimler was not interested and the design was sold to Reliant where it became the basis of the Scimitar GT which was launched in 1964.

In 2012 a replica Ogle SX1000 was available from Nostalgia Cars.