The Maudslay Motor Company was a British vehicle maker based in Coventry. It was founded in 1902 and continued until 1948 when it was taken over by the Associated Equipment Company (AEC) and along with Crossley Motors the new group was renamed Associated Commercial Vehicles (ACV) Ltd.

The company was founded by Walter H. Maudslay, great grandson of the eminent engineer Henry Maudslay to make marine internal combustion engines. He was joined by his sons Cyril and Reginald Walter but the latter soon left to found the Standard Motor Company.

The engines did not sell very well, and in 1902 they made their first engine intended for a car which was fitted to chain-drive chassis. The three-cylinder engine, designed by Alexander Craig  was an advanced unit with a single overhead camshaft and pressure lubrication. It was followed in 1903 by a six-cylinder version, possibly the first overhead-camshaft six to go into production. For 1904 a range of cars was on offer, including one with a 9.6-litre version of the six-cylinder engine. The cars were among the most expensive on the British market.

As well as cars the company made commercial vehicles with the first double decker bus produced in 1905 and a range of trucks varying from small two-cylinder models to six ton models. In 1912 Maudslay supplied a 40 hp (30 kW) engine to power Britain's first petrol-electric railcar.

A side-valve engine was introduced in 1914.

Private car production stopped with the outbreak of war. Five- and six-ton lorries had been supplied to the British War Office in 1913, and these, along with a three-ton model, became the main product during hostilities. In addition, aircraft undercarriages were made, as well as reconditioning work carried out on radial engines. Production of complete engines was started in 1918.

Despite the advent of peace in 1918, private car building was not resumed, apart from a solitary example of an advanced sports car, shown at the 1923 London Motor Show. Heavy goods vehicles were the main line and some were modified for passenger carrying.

A breakthrough came in 1924, when a low-level coach chassis was introduced.

A significant and popular product was the SF40 front-engined coach chassis, which came on the market in the late 1930s.

All civilian vehicle production stopped in 1939, and the company turned out general service vehicles, tank and aircraft components. In 1941, virtually all production was transferred to a new works at Great Alne, near Alcester to escape air raids

However, some production remained in Coventry, and when the factory was bombed in the Coventry Blitz several people were killed there.

This would be known as Castle Maudslay. Automotive production remains at this site to this day. During the 1990s brakes and axles for automotive manufactures like Volvo and Renault heavy vehicles were produced there, and ArvinMeritor, the company that once owned the Castle Maudslay site, maintains a small office and manufacturing facility there to this day (correct September 2009).

A completely new range of heavy vehicles with 4, 6 and 8 wheel chassis as well as luxury coaches was introduced. Castle Maudslay at Alcester would make components, and these would be taken to the Parkside, Coventry works for vehicle assembly. 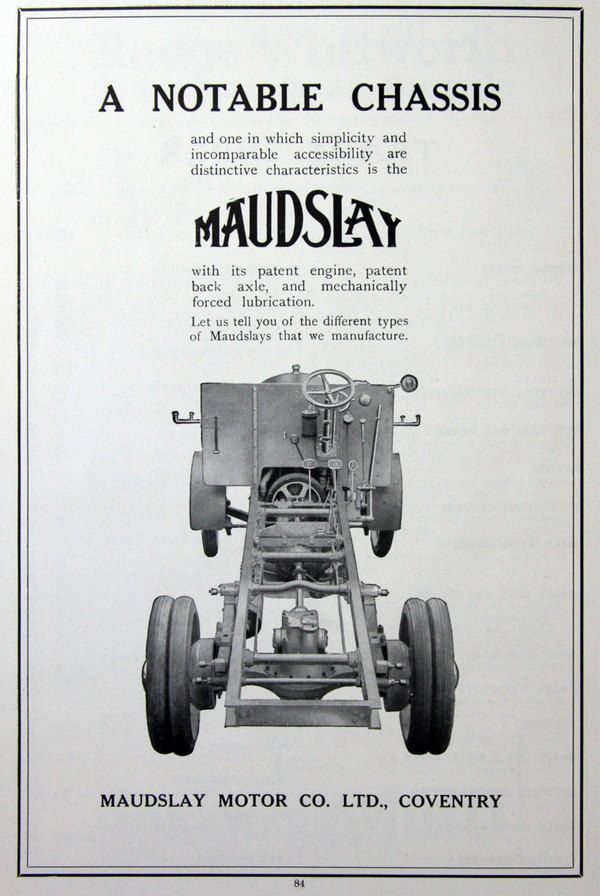 In 1948, Maudslay joined AEC and Crossley in the new Associated Commercial Vehicles (ACV) Ltd. The name was kept on at first, but in 1950 it was phased out.

In 1942, three of Henry Maudslay's grandsons commemorated their grandfather's name by forming the Maudslay Society, an organisation to encourage young engineers.