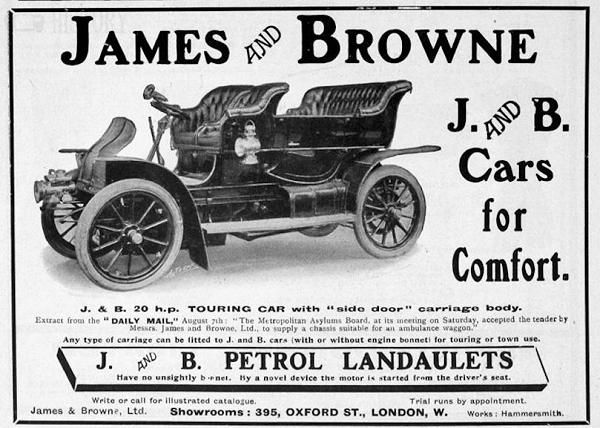 James & Browne was a British automobile manufacturer, based in Hammersmith, London between 1898 and 1910.

The James & Browne factory was located at the Chiswick end of King's Street in West London, and there was a car showroom on Oxford Street.

The early cars had an unusual engine layout with the flywheel between the cylinders. The engines were mid-mounted in the chassis, and the cylinders were horizontal. Drive was to the rear wheels via a 4-speed gearbox and chain. The gearbox is in 2 parts, linked by a connecting rod, the left one containing 2nd and 4th gear, and the right 1st, 3rd and reverse.

The 2-cylinder engine is rated at 9 HP, and is just over 2.5 liters in size. A total-loss oiling system is used on the car, lubricating 6 main oil-ways. James & Browne also launched a 4-cylinder version (16 HP), of a similar design to the horizontal 2-cylinder engine.

In 1906 a vertical-engined car was introduced known as the Vertex and available as either a 20 hp four or 30/40 hp six-cylinder. 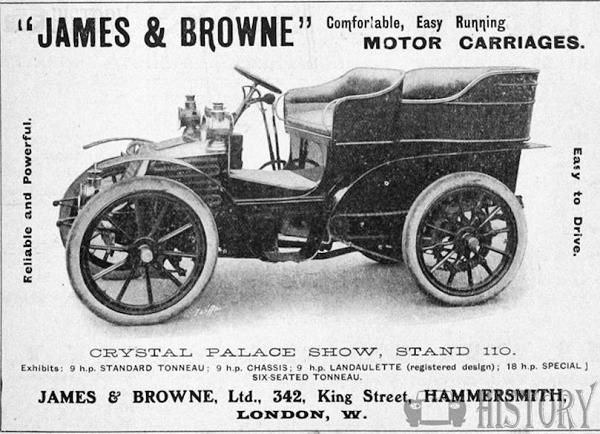 James and Browne car from 1903

Only two of their cars are known to have survived, one built in 1902 and the other in 1904

The 1902 model (registration: AW 38) was first registered in Shropshire and was owned at some time by the Spencer family, blacksmiths, of Shifnal,and has belonged to the students of the City & Guilds College Union (Engineering Faculty of Imperial College London) since 1934.

The first owner of the 1904 car was The Reverend Dr. John Darlington, the vicar of St Mark's Church, Kennington in London, who also owned a house in Curry Rivel, near Taunton in Somerset. The Reverend had originally owned a Peugeot which had badly let him down in 1905, and as a friend of his had a reliable two-cylinder James & Browne car he visited the Showroom in Oxford Street and asked to buy a car "like the one my friend owns". Browne remembered this visit as he had to advise Darlington that the Company had ceased making two-cylinder models in 1904, but he could offer Darlington a new four-cylinder 1905 model. Darlington was adamant that he wanted a two-cylinder car, so it was arranged that an unused two-cylinder engine, gearbox and transmission from the workshop be fitted into a compatible spare chassis, but with a later model body designed for the four-cylinder car.

Ernest Proctor, who was employed at the Westcroft Works, was given the job of assembling this hybrid car, which comprised a very early two-cylinder engine - number 30 - of 1901 or 1902 vintage, a 1904 chassis - number 126, and a body destined for four-cylinder car number 156. 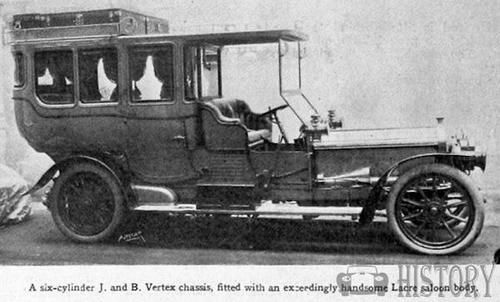 James and Browne car from 1906

Engine: No.30. Twin-cylinder horizontal, each cylinder 4" dia. x 6" stroke. Inlet valves suction operated: exhaust valves mechanically operated. Water-cooled, with no pump or cooling fan.
Ignition: 6 volt battery producing ignition via 2 trembler coils (originally also fitted with magneto with switching between trembler and magneto as required). Conventional spark plugs.
Lubrication: Drip feed from reservoir on dashboard via sight glasses to 6 oiling points on main bearings and pistons.
Gearboxes: Two boxes - one for 1st. 3rd. and reverse, the other for 2nd. and 4th. with a sliding shaft between the two. Lubrication by splash feed in each box.
Transmission: Main drive from engine to gear boxes via heavy steel spur gear into a mating 'Buffoline' rawhide gear attached to the flywheel on the crank shaft.
Final Drive: By two chains via a differential.
Brakes: Foot brake operates on transmission. Hand brake is a conventional drum brake on the rear wheels only.
Wheels/tires: Originally wooden wheels with solid tires, but these were changed in the early years to Sankey type metal wheels and fitted with balloon tires.
Lighting: Side and rear lamps - oil (paraffin). Headlamps acetylene - gas produced from carbide/water accumulator.

The car was first registered Y184 and was delivered to Darlington at Kennington Vicarage on 1O March 1906. It was used in London until it was driven to Curry Rivel on 23 April 1906 by Henry Lucas, a James & Browne salesman, who remained with the owner for some time after delivery, to teach him how to drive and maintain the vehicle.

The car was driven by Darlington, accompanied by his eldest son John, in 1913/1914, on a 2,000 mile tour of Europe. At the outbreak of World War 1, the car was taken back to Kennington where it remained until about 1925, when John Darlington Jr. "got it going again", and drove it back to Curry Rivel. By this time Dr. Darlington had purchased an Armstrong, so the James & Browne was stored in a barn.

When the James & Browne Company ceased trading, Henry Lucas (the salesman and chauffeur) with his colleague and friend Ernest Proctor were both made redundant. Lucas, with a partner John Drake, started a motor business in Egham Surrey called the Egham Motor Company, and in 1914 asked Proctor to join them as Works Manager.

While on holiday in Somerset in 1938, Lucas called at the house in Curry Rivel to see what had happened to the Darlington family; Dr. Darlington was still there and so was the James & Browne car..... in the barn. Dr. Darlington gave the car to Lucas who brought it back to Egham where he and Proctor restored it. It was then kept in the showroom of The Egham Motor Company for many years.

However, when applying to register the car after its restoration, it was discovered that Dr. Darlington had transferred the original registration number, Y184, to his Armstrong, which was (and we believe, still is) on the road! Somerset County Council allocated the nearest unused number to the James & Browne ...Y182 - hence the temporary " 2 was fixed over the 4 on the original number plates.

After World War II the car was officially dated by the Veteran Car Club as a 1904 model, and Lucas and Proctor entered it in the London to Brighton Run in November 1948 - the first London to Brighton run for the car. Henry Lucas was driving and Ernest Proctor was passenger.

Proctor's eldest son, Sidney, joined his father and Henry on many of the early runs, until Ernest died in 1958. By 1963, Lucas had become too infirm to continue to look after the car and, as he had no children, he sold the car to Sidney Proctor. On Sidney’s death the car passed to his son. The car was in the Proctor family until it was auctioned in November 2007