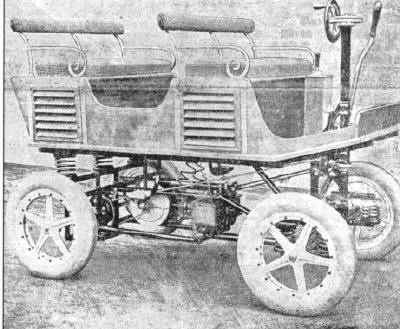 The Garrard & Blumfield or Blumfield & Garrard was an English electric car manufacturer from 1894 to 1896. The company is presumed to have been founded by C. R. Garrard and T. W. Blumfield.

The vehicles were built for them by Taylor, Cooper and Bednell of Coventry, were equipped with 4-inch pneumatic tyres and described as "neat and well-fitted".

Thomas Blumfield (born Southampton circa 1870) worked as a Cycle Examiner, Turner and Fitter. In 1891 he lodged at Brick Kiln Lane, Coventry with Isaac Woolgat, a Bicycle Polisher, and his family.

In 1896 he worked for the Thomas Humber Bicycle Co in Coventry, and supervised the prototype E. J. Pennington motorcycle.

Charles R. Garrard (poss.1877 or 1882) was born in Coventry. He was a certified Member of the Institute of Mechanical Engineers, (M.I.M.E.) and president of the Cycle Engineers' Institute.

Garrard constructed an electric carriage in 1893 in co-operation with T.W. Blumfield.

Garrard was managing director of the Garrard Co. who built Clément-Garrard motorised cycles from 1902 to 1905 in Birmingham, Great Britain, under licence from Adolphe Clément-Bayard's Clément-Gladiator.

In early 1904 Garrard showed a forecar tandem tricycle where the passenger sat between the front wheels and the driver sat behind. The water-cooled engine was rated at 4 hp and connected to the three-speed gearbox by a clutch. The final drive was by propeller shaft to the single rear wheel. It had leaf-spring front suspension and pivoted-fork at the rear. It was demonstrated at a hill-climb in 1904 but was not developed.

Garrard superintended the erection of the Clément-Talbot Automobile Works in Ladbroke Grove, London, in 1903.

On 14 December 1893 and 31 March 1894, Blumfield and Garrard were granted a patent for 'Improvements in electric motor carriages'.

On 27 July 1894 The Engineer (page 88) published details of an electric carriage with 4-inch pneumatic tyres that was built for them by 'Taylor, Cooper and Bednell' of Coventry and described as "neat and well-fitted".  Details of the vehicle were also published in The Cyclist of June 1894.

In early 1894 they paid their 10 franc entry to the Le Petit Journal Competition for Horseless Carriages (Concours du 'Petit Journal' Les Voitures sans Chevaux) that was run from Paris to Rouen in France. They did not show up at the qualification events in July 1894.