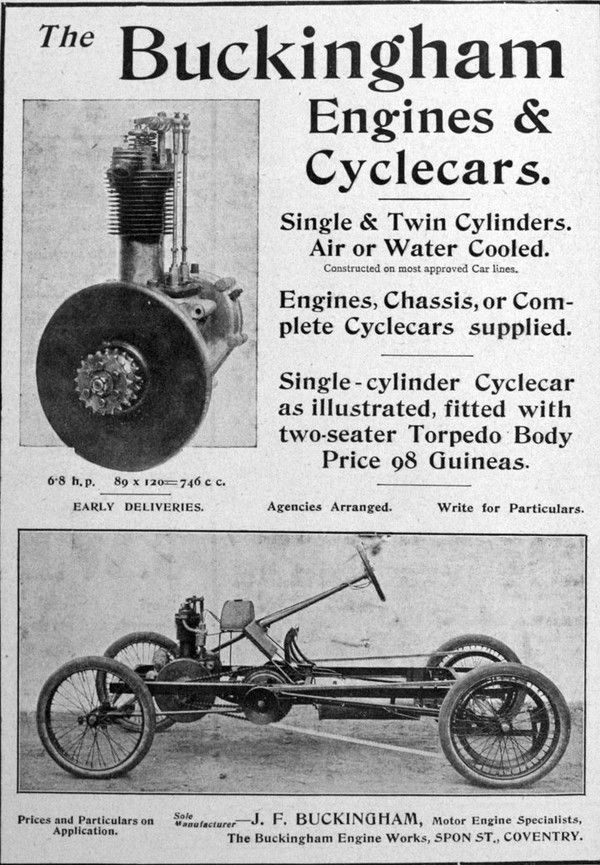 The Buckingham was an English automobile manufactured by the Buckingham Engineering Company in Coventry from 1914 until 1923. The company had made cars under the Chota name from 1912.

The first cars were a 746 cc cyclecar and a 1492 cc V-twin-engined light car both previously sold as Chotas. The engines were to Buckingham's own design  and were water-cooled.

Production was suspended during World War I and during the conflict Captain Buckingham, the company owner, gained fame as the inventor of the tracer bullet, which was used against airships.

In 1920 he returned to car production with a new model using an air-cooled version of the pre war V-twin engine but now with a capacity of 1096 cc, a two-speed gearbox and belt drive to the rear axle. A three-speed gearbox was fitted from 1922 with shaft drive and a rear axle incorporating a differential. Front suspension was by a transverse leaf spring and the rear by quarter elliptic leaf springs. The two-seat bodies were made by the coachbuilder Charlesworth.

A coupé version was called the "Palace".