Dellow cars were made in a factory at Alvechurch, near Birmingham, England between 1949 and 1956.

Dellow was a product of Dellow Motors, a small garage business in Alvechurch, near Birmingham, and the name was derived from the partners, K.C. Delingpole and R.B. Lowe.

The basis of the design was a simple tubular chassis frame, but all the main mechanical components were of Ford Ten/ Prefect origin, including engine-gearbox, back axle, most of the suspension and the springs, and the roadwheels. The body was in light alloy on a tubular framework, and naturally there were no doors. Weather protection was, to say the least, sketchy, though a hood was available if the customer insisted. A trials-orientated feature was the big (15 gallon) fuel tank, and twin spare
wheels, both of which hung over the tail of the car, and both of which added more weight to the driving wheels. Later Dellows were Mk Vs, with a similar chassis layout, but with the transverse leaf spring front suspension discarded in favour of vertical coil springs.
In 1956 the last of these handbuilt cars, which sold only in tiny numbers, was replaced by a new Mk VI Dellow, which had a full-width glass-fibre bodyshell, but as the only reason for buying a Dellow was for its lightweight and near complete absence of bodywork, this failed to attract sales, and Dellow disappeared from the motor manufacturing business. 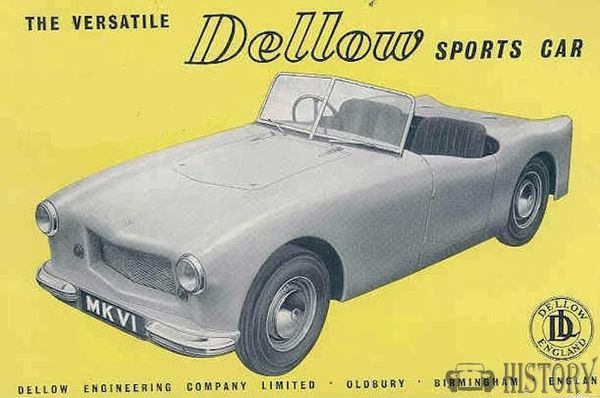