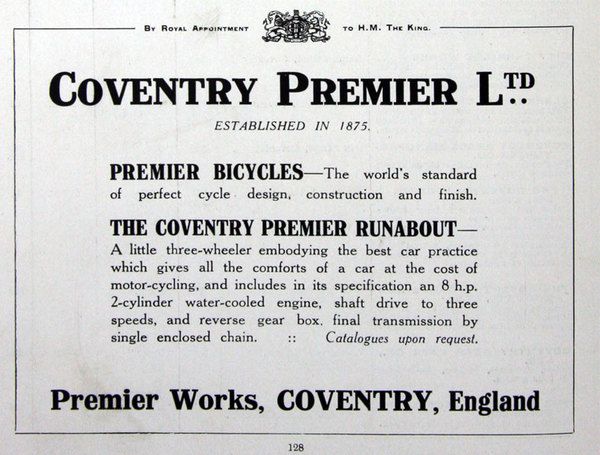 The Coventry Premier was a British car and cyclecar manufacturer based in Coventry from 1912 to 1923.

The company can trace its origins back to 1876 when the Hillman and Herbert company was founded as bicycle makers. William Hillman went on to set up his own Hillman car company in 1907. Hillman and Herbert changed its name to the Premier Cycle company in 1892 and added motorcycles from 1908 and a cyclecar in 1912. This had a 998 cc air-cooled V-twin engine and chain drive to the rear axle. A proper light car designed by the works manager G.W.A. Brown, who had been with Talbot, was added in 1914 with four-cylinder engine of 1592 cc and shaft drive.

The company changed its name from Premier to Coventry Premier Ltd in November 1914. Testing of the 4-cylinder car continued during the war, but when peacetime production restarted in 1919 it did not appear. Brown had moved to Arrol-Johnston in 1917. Instead the company launched the 8 hp Super Runabout two-seat, three-wheeled cyclecar with 1056 cc, water-cooled, V twin engine, shaft drive to a rear-mounted gearbox and chain drive to the rear wheels.

In 1921 Coventry Premier was bought by Singer and the three-wheeler was replaced by a four-wheeled version using the same engine but now having the gearbox combined with the rear axle, eliminating the chain drive. In 1923 the badge appeared on a basic version of the Singer Ten. The name was no longer used on cars from 1924, but bicycle making continued for a few more years. 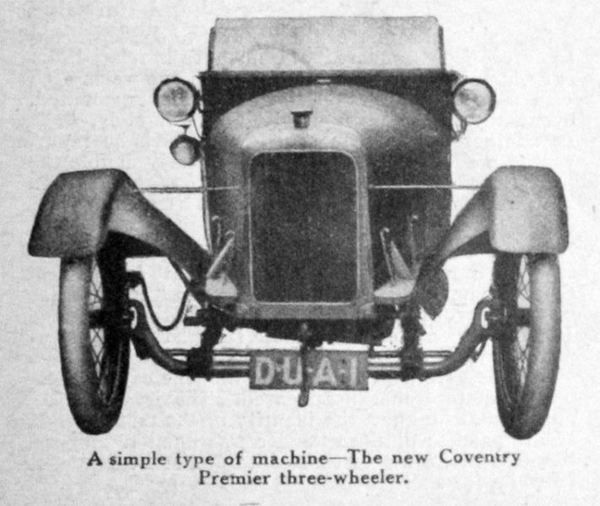