The ABC was an English car manufactured between 1920 and 1929 by ABC Motors.

It was a light car (305 kg), powered by a 1203 cc flat-twin, air-cooled engine designed by Granville Bradshaw (the man who was also responsible for the ABC Motorcycle). The engine however was difficult to start, loud, inefficiently lubricated, and prone to breakages, particularly the quite long, exposed push rods. Over time quality improved dramatically. Combined with the vehicle's light weight, the powerplant made the car quite fast for its size, capable of speeds pushing 60 miles per hour, and boasting quite good acceleration. ABC was originally part of the Harper Bean combine, and was based in Hersham, Surrey and Harper Bean supplied castings, stampings, and forgings utilized on the first ABCs. The car was expensive; in 1920 it sold for £414 but came down to £265 for a four seater in 1923.

The "radiator" cap was actually the fuel tank filler, which led to problems when mechanics not familiar with air-cooled cars topped off the fuel tank with water.

The company introduced a Super Sports model in 1925 with a 1320 cc engine. This was the only model offered for the last four years of ABC's production. 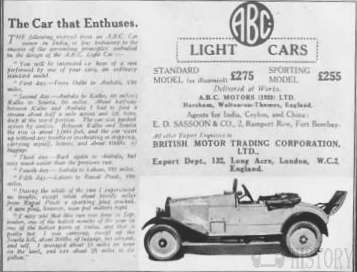