Edward Greenwood Wrigley established a tool making business at 232 Aston Road, Birmingham in 1898. EG Wrigley and Company moved to Foundry lane, Soho, Birmingham in 1902. In 1906 Wrigley's showed a complete car gearbox at that year's Olympia Show and by 1912 were manufacturing front and rear axles.

In 1913 they began experimenting with a cyclecar with a two-cylinder, air- or water-cooled engine and two-speed gearbox. Very few were built before the company was involved in war work, including making aircraft parts. After the war Wrigley handed over the running of his company to due to ill health, he died in January 1941.

The company continued building, among other products, engines and gearboxes. At the end of 1923 it was placed in receivership. On 1 January 1924 William Morris bought from the receiver the complete assets, including the buildings, and on February 4 of that year, the former Wrigley business, incorporated as Morris Commercial Cars Limited, resumed the manufacture of commercial vehicles based on Morris car chassis.

Wrigley cars were only made during 1913. 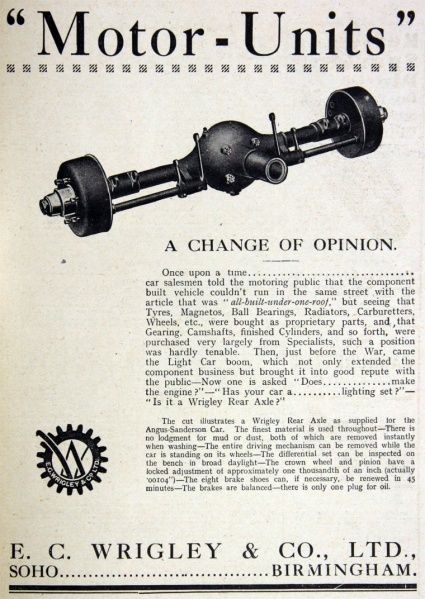