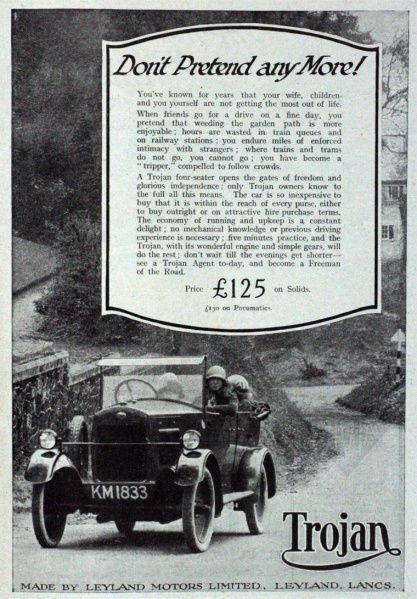 Trojan was a British automobile manufacturer. Cars with the Trojan marque were made between 1914 and 1965.

The company was founded by Leslie Hayward Hounsfield (1877–1957) who went into business as a general engineer in a small workshop called the Polygon Engineering Works in Clapham, South London. He got the idea to make a simple, economical car that would be easy to drive and started design work in 1910.

In 1913 the prototype was ready. It had a two-stroke engine with four cylinders arranged in pairs, and each pair shared a common combustion chamber - a doubled-up version of what would later be called the "split-single" engine. The pistons in each pair drove the crankshaft together as they were coupled to it by a V-shaped connecting rod. For this arrangement to work, it is necessary for the connecting rod to flex slightly, which goes completely against normal practice. The claim was that each engine had only seven moving parts, four pistons, two connecting rods and a crankshaft. This was connected to a two-speed epicyclic gearbox, to simplify gear changing, and a chain to the rear wheels. Solid tyres were used, even though these were antiquated for car use, to prevent punctures and very long springs used to give some comfort.

Before production could start war broke out and from 1914 to 1918, Trojan Ltd, as the company had become in 1914, made production tools and gauges. In 1920 the first series of six cars were made from a works in Croydon and the final production version was shown at the 1922 London Motor Show. An agreement was reached with Leyland Motors to produce the cars at their Kingston upon Thames factory where work on reconditioning ex RAF wartime trucks was running down. This arrangement would continue until 1928 when Leyland wanted factory space for truck production. During the nearly seven years of the agreement 11,000 cars and 6700 vans were made.

The car known as the Trojan Utility Car went onto the market at £230, reducing to £125 in 1925, the same as a Model T Ford. Nothing was conventional. Rather than a chassis the car had a punt shaped tray which housed the engine and transmission below the seats. The transmission used a chain to drive the solid tyre shod wheels. The 1527-cc engine to the ingenious Hounsfield design was started by pulling a lever on the right of the driver. To prove how economical the car was to run, the company ran the slogan "Can you afford to walk?" and calculated that over 200 miles (320 km) it would cost more in shoes and socks than to cover the distance by Trojan car.

A modified car was released in 1920 with a smaller 1488-cc engine to bring it into the sub-1.5-litre class and with pneumatic tyres available as an option. The car was guaranteed for 5,000 miles.A major contract was agreed with Brooke Bond tea for delivery vans making the car familiar all over Britain and with a top speed of 38 mph (61 km/h), not causing too much worry over speeding drivers.

With the ending of the Leyland partnership, Leslie Hounsfield took over production himself back in Croydon but at new premises with Leyland continuing to supply some parts until the early 1930s.In spite of new body styles, sales of the cars were falling and so a new model, the RE, or Rear Engine capable of 45 mph (72 km/h) was announced in 1931. It still did without electric starter and had only rear-wheel braking, and was beginning to look very old fashioned, and although new modern bodies were fitted, only about 250 were sold. A final attempt was the Wayfarer of 1934 with the engine back in the middle, but now with three-speed gearbox and shaft drive, but only three were sold, and the 6-cylinder Mastra did no better, with only two produced. The original van continued to sell well, however, and the Utility car could still be ordered; the last one was delivered in 1937.

Leslie Hounsfield had left the company in 1930 to set up a new enterprise making amongst other things the "Safari" camp bed which would be made in thousands during World War II.

Trojan Ltd continued to make vans until war broke out and during hostilities made bomb racks and parachute containers. With peace, van production restarted still with the original engine until 1952 when it was replaced by a Perkins diesel.

In 1959 the company was bought by Peter Agg and from 1960 to 1965 he built under licence Heinkel bubble cars selling them as the Trojan 200, the last vehicle to bear the Trojan name.The company acquired the rights to build the Elva Courier sports car in 1962, producing 210 cars between 1962 and 1965 when production switched from road cars to the Mclaren-Elva racing car.

The company existed as Trojan Limited (Company No 134254 having been incorporated on 27/02/1914) until 19/03/2013, though no longer operating from the Croydon factory which has been sold, on which latter date it was dissolved via "Voluntary Strike-off".