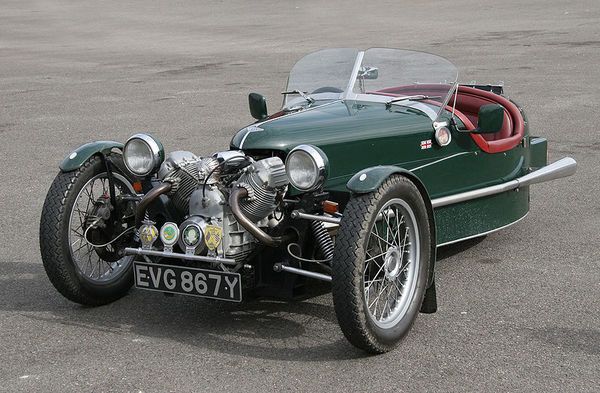 Triking is the United Kingdom based manufacturer of the 3-wheeled Triking Cyclecar, located in Marlingford, Norfolk

The Triking was introduced in 1979 in Norfolk (UK) by technical artist, Tony Divey. Being a  long term Morgan enthusiast he was inspired   by 3-wheeler Morgans and due to the high prices of the Morgans at the time decided to design and build his own car that would be in effect a modern Morgan.

The first production car, now in Germany,  was started in 1979. Trikings have fairly constantly developed over the years, but a major revamp was made in 1990 with chassis 100 being built. Divey redesigned the body and chassis with a new tubular front end, and a one piece fibreglass body with removable bonnets front and rear. Before this the Triking had alloy side panels and fibreglass bonnet, rear end and wings fixed to a steel space frame. A range of engines (Moto Guzzi) have been fitted, from 850cc to the latest 1100cc Daytona giving a power to weight ratio comparable to a Ferrari! There is also a 'Super light' racing version, and a supercharged example in existence

Whether you see this as a sportscar with a motorbike engine or a motorbike with a sportscar body, the Triking always produces the exhilaration! By no means intended as a same effect for its pilot copy of the famous Morgan three-wheelers, the styling is very pleasing indeed, the wide body allowing plenty of comfort for two and the 850cc Moto Guzzi engine churning out enough power for some very rapid driving and sparkling performance.

The Triking is available in three forms, the first of which is the basic kit at plus VAT. This supplies you with everything bar the engine, transmission and rear wheel which can be obtained from any of the Moto Guzzi range of 'bikes. Next up the ladder we have the complete kit with engine and transmission ready-mounted at £4433 plus VAT, and finally they have complete cars ready to drive at £6609 including VAT and car tax. Much of the designer's knowledge of modern racing car construction has gone into the strong box-section backbone chassis, which carries a tubular epaceframe clothed with stressed alloy side panels plus a bonnet, rear section and wings all moulded in glassfibre. Steering is straightforward rack and pinion using Triumph and Lotus parts, while the modern independent suspension and disc brakes make the Triking remarkably safe and stable compared with the vintage three-wheelers upon which the car is based. And with shaft drive to the rear wheel and modern mechanics, this highly individual and beautifully crafted machine is certain to go far.

The Triking has a range of three power units, either the standard 850 or units or the tuned, 80 bhp Le Mans motor. Automatic transmission is offerecl as an optional extra and other parts to complernent the kit are a range of instruments, chromed luggage rack, wood rimmed steering wheel and a comprehensive range Of switches, etc.Trikings are essentially a modernised version of the 1930s Morgan three-wheelers. They are also in practice a cross between a sports car and a microcar.Former Lotus employee Tony Divey built the first Triking in the late 1970s in response to being unable to acquire a Morgan.

The original Triking featured a steel space frame with an alloy panels and glass-fibre bonnet, and was powered by a Moto Guzzi V-twin motorcycle engine. This proved popular and production eventuated. In 1990 Divey redesigned the Cyclecar with a new tubular front end and a one piece glass-fibre "body".