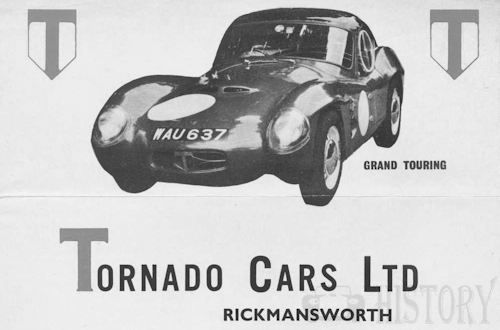 Tornado Cars Ltd was founded in 1957 by Bill Woodhouse and Tony Bullen based in Rickmansworth, Hertfordshire, UK.

The first model was the Typhoon Sports, available either as a body for fitting to Ford 8/10 chassis (following a then current market trend for "specials" based on these mechanical components) or with a Tornado designed and manufactured chassis to which a range of engines and transmissions could be fitted. About 400 of this models are believed to have been made through to 1962.

A similarly styled Tempest model featuring a Ford Anglia 105E engine and independent wishbone front suspension and live back axle. This was introduced around 1960-61, but only around 15 were produced. A Competition Tempest was also produced using the same front suspension, but with a highly tuned formula junior engine with twin 38 dcoe's. Fitted with a close ratio gearbox and having an independent rear axle. Also from a Formula Junior with in board alfin drums. A Tornado Thunderbolt was also produced using a TR3 engine and a stronger chassis and suspension. Only 1 was built. This car survives today alongside the Competition Tempest with the original builder.

In 1962, the company introduced the Talisman 2+2 coupe carrying an attractively styled fibreglass body on a more sophisticated tubular steel chassis with Ford 1,340 cc or 1,500 cc engines in various states of tune. This model was available either in component form or factory finished and was praised for having lively performance combined with good ride and handling characteristics, and a high standard of finish. Cash-flow problems forced the company into liquidation in 1964 after just approx. 186 Talismans had been made.