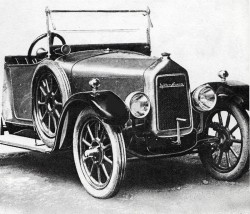 The Ashton-Evans was an English car manufactured in Birmingham from 1919 to 1928 by an engineering company who also made railway locomotives and aircraft parts. The cars were designed by E Bailey who had been with Sunbeam and T Bedford.

The first car of the marque had a rear track of only 8 inches (200 mm) to avoid the need for a differential, but a normal rear axle was used from 1920 on, when the car name changed to Ashton before reverting to Ashton-Evans in 1921. Most cars featured 1 1⁄2-litre, 4-cylinder Coventry Simplex engines and three-speed constant-mesh gearboxes with selection made by dog clutches. Some of the early cars might have had two-cylinder engines. Two- and four-seat open bodies were available.

Car production was temporarily suspended in 1927 but never resumed.