The Bristol Type 603 is a car which was launched in 1976, by British manufacturer Bristol Cars to replace the 411.

With the 603 – introduced along with the Zagato-built 412 – the Bristol car underwent its first major facelift since the introduction of the 406 in the late 1950s. The classic three-box two-door saloon was replaced by a considerably more streamlined design with a much larger and more curved rear window. The manufacturer pointed out that the new car had more head, leg and shoulder room than any previous Bristol. The outdated style of door handle was updated. 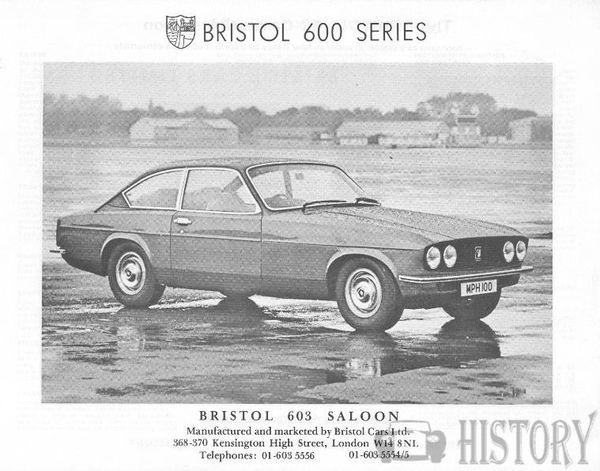 The original 603 was offered in two versions, largely owing to the energy crisis which increased fuel prices so that affordability of fuel was no longer a certainty for those who could afford such expensive cars. The 603E has a 5,211 cc V8 petrol engine, whereas the 603S had a larger 5.9 litre unit, from Chrysler. The 603 saw improvements over previous models in its fuel consumption, being able to achieve as much as 22 miles per imperial gallon (13 L/100 km; 18 mpg-US) at around 100 km/h (62 mph) compared with the 411's 17 miles per imperial gallon (17 L/100 km; 14 mpg-US) — for comparison, as good as the Jaguar XJ-S. Both retained the same transmission and suspension as the 411, but the cabin had become more luxurious with the provision of electrically adjustable seats and air conditioning.

With the Blenheim, Bristol further refined the 603, in particular modernising the mechanicals of the car through the introduction of multi-port fuel injection, which improved both performance and fuel consumption. Turbocharging was no longer available, but the Blenheim Series 1 still had the same level of performance as the Brigand.

There was a significant change in frontal and rear-end styling with the introduction of the Blenheim. The headlights were paired and mounted considerably inboard from the extreme front of the car. The bonnet was also modified with the fitting of gas struts to hold it up when open for the first time, and featured a fully rectangular hinge for the first time in Bristol's history.

Since that time the Blenheim has gone through two additional series, the Bristol Blenheim Series 2, made from 1998 to the end of 1999, featured for the first time a 4 speed overdrive automatic transmission, which significantly improved fuel consumption, whilst the Blenheim 3 which went on sale in 2000 saw the abandonment of the vertically mounted tail-lights and a much revised interior layout with completely new gear selector and improved instrumentation.