Bristol Cars Limited is a manufacturer of hand-built luxury cars headquartered in Patchway, near Bristol, United Kingdom Bristol have always been a low-volume manufacturer; the most recent published official production figures were for 1982, which stated that 104 cars were produced in that year.While no official figures have been produced since then it is believed that in recent years production has been around 20 cars per annum.

Unlike most speciality automakers, Bristol does not court publicity and has only one showroom, located on Kensington High Street in London. Nevertheless the company maintains an enthusiastic and loyal clientele.

The company suspended manufacturing in March 2011, when administrators were appointed and 22 staff were made redundant. In April 2011, the company was purchased by Kamkorp 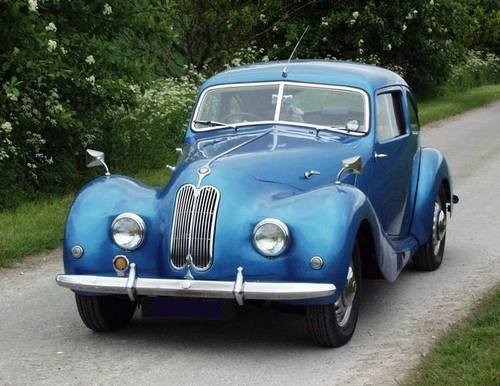 The history of Bristol Cars began in 1945, with the end of World War II. Forecasting an excess labour capacity, the Bristol Aeroplane Company began working with AFN Ltd, makers of Frazer Nash cars and British importer of BMWs before the war, on plans for a joint venture in automotive manufacture.By July 1945 BAC had created a Car Division and bought a controlling stake in AFN. Originally a division of this aircraft maker, Bristol Cars was sold after its parent joined with other British aircraft companies in 1960 to create the British Aircraft Corporation, which later became part of British Aerospace. A factory was established at Filton Aerodrome, near Bristol

HJ Aldington, a director of the Bristol Aeroplane Company affiliated AFN (BMW's pre-war concessionaire in the UK), used his British Army connections to visit the bombed BMW factory in Munich several times post-war. In 1945 he took plans for BMW cars back to Britain,and BMW chief engineer, Dr. Fritz Fiedler was also employed. Its first car was the Bristol 400, prototyped in 1946 and introduced at the 1947 Geneva Motor Show. Derived from immediately pre-WW2 BMW products (thanks to a connection to BMW through Frazer Nash), the chassis was based on the BMW 326, the engine on the 328, and the body on the 327. Even a variation on the famous double-kidney BMW grille was retained. Bristol, however, did a thorough examination of the car's handling and ended up with performance "only matched by outright purpose-built competition cars".700 of the Bristol 400 were built, with 17 receiving "handsome" convertible bodywork from Pininfarina.

In 1949, the 400 was joined by the five-place 401. Bodied by Touring, it was aerodynamically sleeker, accelerated better, and had higher top speed. It was joined by the drophead 402, of which just 24 examples were built

The 403 followed in 1953, which featured improved brakes, gearbox, dampers, heater, and engine (a detuned racing motor, in fact). Bristol would use this same engine in the 450, entered at Le Mans in 1953; it broke its experimental crankshaft, but despite being less than aerodynamically ideal proved fully five seconds a lap quicker than the competition.Bristol withdrew from racing two years later.

Along with the 403 was the 404, on a shorter wheelbase, with more powerful engine and styling reminiscent of the 450. The 404 introduced a concealed front wing-mounted spare wheel and battery. It was built to extremely exacting standards, and the price reflected it; this, plus newly-introduced "punative taxation", meant only 40 were produced.

The 405, which entered production in 1954, was much more successful, not least for being Bristol's only four-door. It remained in production until 1958, with 297 saloons and 43 drophead coupés produced in all.

It was followed in 1963 by the 408, with drastic restyling as well as improved suspension. This was succeeded by the 409. Many buyers preferred the crisp steering and gearbox of the earlier six-cylinder cars.

The 410, introduced in 1966, was a return to the high-performance touring tradition, offering the same top speed as the 409, and superior acceleration, with the same powerplant. It also saw Bristol become a private company and marked a return to quality to the exclusion of output: no more than three cars a week were to be made.

In 1969, the Bristol 411 appeared, with a new 6.2 litre Chrysler V8 (still rebuilt and modified by Bristol, as before) granting higher top speed and better acceleration still.

Until 1961, all Bristol cars used derivatives of a six-cylinder BMW engine. This well-regarded engine also powered a number of sports and racing cars, including all post-war Frazer Nashes (apart from a few prototypes), some ACs, some Lotus and Cooper racing cars, and several others.

In 1961, with the launch of the Bristol 407, the company switched to larger Chrysler V8 engines, which were more suitable for the increasingly heavy cars. All post-1961 Bristols, including the latest Blenheim and Fighter models, use Chrysler engines.

On 3 March 2011, it was announced that Bristol Cars had gone into administration, with the immediate loss of 22 jobs. On 21 April 2011, the company was purchased by Kamkorp, which also owns the Frazer-Nash Group of Companies