The Bristol 407 was a luxury car produced by British manufacturer Bristol Cars between 1961 and 1963.

It resembled the 406 built between 1958 and 1961 on the outside. The only differences were a single horizontal bar on the slightly larger radiator grille, which had slowly increased in size from the 405 to the 406 to the 407, and two exhaust pipes instead of one at the back. The 407, on the other hand, did not have the outdated BMW-derived six-cylinder engine that was no longer suitable for Bristols to compete in performance with other British luxury car brands. A 5,130 cc (313 cu in) Chrysler V8 constructed in Canada, fitted with a new camshaft and mechanical tappets (lifters) of Bristol design, replaced the old six-cylinder engine.It re-established Bristol's credentials in the field of performance cars. The engine gave the 407 a maximum speed of over 125 mph (201 km/h).

The Bristol 406 , which was produced from 1958 to 1961, suffered, unlike its predecessors, from a lack of performance: Bristol's own 105 bph in-line six-cylinder engine (type 110) no longer enabled the 1.5-tonne car to achieve the sporty performance that earlier Bristol models had distinguished had. A further increase in performance of the engine, the concept of which dates back to before the Second World War , could no longer be achieved.

Bristol was therefore looking for a new drive in the second half of the 1950s. First, the company began to develop its own new engine. The key data was a six-cylinder configuration and a displacement of 3.0 to 3.5 liters, a value that was in the range of contemporary Alvis engines. The power output of the first prototypes was not convincing, however; In any case, the parent company was of the opinion that the financial cost of the new design was not in proportion to its benefit. In 1959, Bristol tested an Armstrong Siddeley six-cylinder in-line engine as a further alternative . The 4.0 liter engine was standard in the Armstrong Siddeley Star Sapphireused and achieved 165 bhp. Bristol fitted a 406 with this engine and ran some factory tests. A takeover into series production did not materialize, however. The prototype went on sale and was in regular use until 1975. In 2015 it was rediscovered in an unrestored condition.

Ultimately, Bristol decided to use American eight-cylinder from Chrysler . It is not clear who led the initiative to use American engines. Bristol owner Tony Crook repeatedly told the following story: Actually, Chrysler only wanted to order a Torque-Flite automatic transmission for test purposes. To the surprise of the Bristol employees, Chrysler would have delivered an in-house eight-cylinder in addition to the transmission that had been ordered. Bristol then subjected the engine to thorough tests and, in view of the high performance and economic efficiency of the concept - which meant saving its own development costs - decided to use the American engine. To further cost saving, Bristol did not include the engines directly from the US but from Canada, which the Commonwealth was one. This meant that when the engines were brought to the UK, no import duties were incurred.

The basis for the Bristol engine was an older American engine, which had debuted in 1956 with the Chrysler brand Plymouth and originally had a displacement of 260 CID (4.2 liters). Bristol obtained the engine blocks from the USA and had them completed by hand in a Canadian Chrysler workshop. A number of far-reaching modifications were carried out there at the same time, which differentiated the Bristol engines from their high-volume counterparts:

Overall, after the manual modifications, the engine delivered an output of 250 hp. This means that the performance potential had more than doubled compared to the previous model. Bristol was back on track to become a sports car maker.

The switch to American engines was problematic. This step was not without a model: Facel Vega from France had already embarked on this path a few years earlier, and British competitor Jensen was about to do the same. Conservative British customers were nonetheless skeptical and, according to Tony Crook, quite a few are said to have seen it as a fall from grace. Most of the critics were reconciled by the outstanding performance of the car.

Bristol's veteran 2.0 liter six-cylinder engine continued to be built for some time after the introduction of the 407. It was primarily supplied to AC Cars , where it was installed in the Ace, Aceca and Greyhound models until the end of 1962 .

For the new car, Bristol adopted the familiar chassis largely unchanged. The suspension, damping and steering, however, have been adapted to the significantly higher weight of the car. The vehicle continued to have a body made of sheet aluminum, which was based on a massive steel frame. Unlike its predecessor, the scaffolding was now manufactured by Park Royal Vehicles , the company that also produced the legendary London double-decker buses.

Outwardly, the 407 appeared to correspond exactly to its predecessor, the 406: the naked eye hardly noticed any difference, even in a direct comparison of the two models. In fact, however, the body panels of the 407 had been almost completely redesigned - but with the stipulation that the design of the 406 was kept as close as possible. The reason for the changes was the fact that Chrysler's eight-cylinder engine was built significantly lower than the old Bristol engine. This enabled a flatter bonnet, a lower belt line and - to keep the proportions in balance - a different roof. The Bristol Owners Club claims that no body panel on the 406 matched the 407. If so, then the step from 406 to 407 was certainly one of the best camouflaged model changes in automotive history.

The 407 was initially offered with both automatic and manual transmission. The automatic system was - typical for American designs of the time - to be operated from the dashboard via push buttons. For the critical clientele, Tony Crook also had a manual transmission from Pont-à-Mousson on offer (the own Bristol transmission could not withstand the torque of the Chrysler engine); Crook later reported, however, that not a single customer had ordered the manual transmission.

The Bristol 407 remained in production until the summer of 1963. Around 300 copies are said to have been produced during this time.

As in the case of the Bristol 406 , Bristol also had a special body designed by Zagato for the 407 . The result, the Bristol 407 GTZ Zagato, had nothing to do with the 406 Zagato. The new design featured an elongated, rounded body with a very low belt line, a "hip swing" over the rear wheels and a lavishly glazed hatchback. The car was significantly lighter than the factory 407 and reached top speeds of over 200 km / h.

The Bristol 407 GTZ Zagato was first exhibited in October 1961 at the Earls Court Motorshow. The car was not on the Bristol stand, however, but on the inconspicuous Zagato stand. The originator of the project was again Anthony Crook (and not Bristol Cars Ltd.). It only took 10 weeks from the idea to the finished product. You could see that in the car. Much was improvised. This did not only apply to the radiator grille with a crest-shaped shield, that of a Lancia Flaminia Supersportwas borrowed. The car was received warmly, but the few journalists who were allowed to drive the car criticized the front-heavy construction. The heavyweight of the car was the American engine. The extremely light Zagato body therefore led to an unfavorable weight distribution. Tony Crook, who had initially hoped for a few orders, abandoned the project in the summer of 1962 because the factory had not gotten a grip on weight distribution problems. For all that is known, the 407 GTZ remained a one-off. It still exists today.

Another special model was a four-seater convertible that Carrozzeria Viotti from Turin produced on an uncut chassis from the 407.  The body was relatively simple and took out some perspective, the design of the Fiat 1500 Spider anticipated. The car was first presented at the 1960 Turin Motor Show at the Viotti stand. This was followed by another presentation in Great Britain, this time at the Bristol Cars stand. The actor Peter Sellers , who loved Bristol vehicles, took over the car for some time, leaving his colleague Britt EklandTake a picture next to the car. The Viotti convertible remained a one-off. It still exists today. 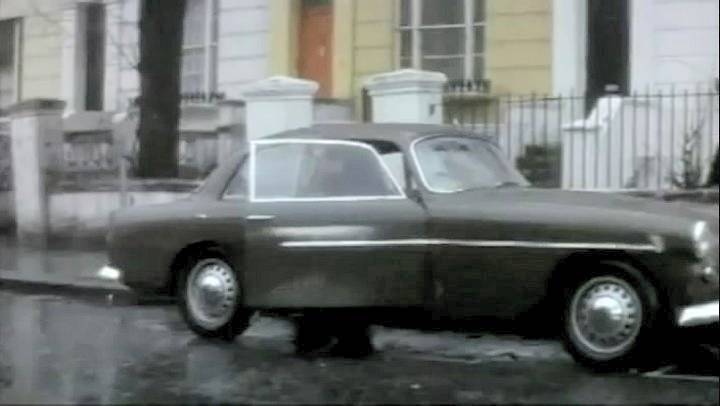