The Bristol VR was originally designed for single-deck or double-deck bodywork. The design featured a longitudinal mounted engine set behind the rear offside wheels, rather than the more typical transverse layout. A choice of Gardner 6LX or 6LW engines or the Leyland O.600 engine were to be available. The transmission was a semi-automatic unit by Self-Changing Gears. Originally intended to be designated the Bristol N-type, the chassis became known as the Bristol VR, an abbreviation for Vertical Rear, a reference to the layout of the engine. Two lengths were available, 32 ft 9 in (9.98 m) and 36 ft (11 m), and these were designated VRS and VRL respectively. A drop-centre rear axle and low frame were employed to keep the height of the vehicle down.

Two prototypes were built in spring 1966, and were shown at the 1966 Earls Court Motor Show. This was the first show at which Bristol could exhibit since 1948, their products being available to the open market again. The prototypes had 80-seat bodies by Eastern Coach Works (ECW) and entered service with Central SMT and Bristol Omnibus Company.

In July 1967 Bristol introduced a new version, the VRT, with a more conventional transverse-engined layout. The chassis was only available as a double-decker. There was also a choice of two frame heights. The longitudinal mounted version remained, and became known as the VRL. However, in July 1968 the British government introduced a grant intended to modernise the British bus fleets, and speed-up the introduction of one-man operation. The standard specification for the grant required a transverse rear-engined vehicle, with the result that few VRLs were produced.

The first production vehicles entered service with Eastern Scottish, a member of the Scottish Bus Group, in December 1968. Almost immediately, problems were experienced with the transmission and overheating of the engine, problems similar to those experienced by early versions of the Leyland Atlantean and Daimler Fleetline. A large number of the initial production versions entered service with the Scottish Bus Group. Continued reliability issues resulted in 1973 in the exchange, on a one-for-one basis, of 91 Bristol VRTs from Central SMT, Eastern Scottish and Western SMT for front-engined Bristol Lodekka FLF6Gs from the National Bus Company.

A revision of the vehicle, the Series 2, was introduced in 1970, with changes including a replacement of the single-piece wrap-around engine compartment door with a 3 piece version with a lift up rear section and swing out sides. In 1974, the Series 3 was introduced, with the main changes being to the engine compartment, to keep in line with new noise legislation. The most visible change was to move the ventilation grills from alongside the engine to higher up, just below the top deck windows, connected to the engine compartment by trunking, plus the removal of the grilles from the rear engine compartment door. The short, low height version became the standard vehicle for the National Bus Company. The VRT remained in production until 1981, by which time 4,531 had been built. The Leyland Olympian, the successor to the VR, shared many similarities to the Series 3 VR, although with updates such as air suspension.

Like most Bristol buses, most VRs were bodied by Eastern Coach Works. However some were bodied by Northern Counties, Alexander and East Lancs. Willowbrook of Loughborough also bodied a few VRs, notably for East Kent, Northern and Cardiff. Metro Cammell Weymann bodied 200 for the West Midlands Passenger Transport Executive.

The ECW body was distinctive for its rounded rear upper deck, a feature carried over from the ECW bodywork on the Bristol Lodekka and having its roots in ECW's styling on the Bristol K-type in the 1940s. The vehicles were typically constructed in the two heights set in the bus grant standards, 13 ft 8 in (4.17 m) and 14 ft 6 in (4.42 m), mostly Bristol Omnibus, Ribble, Northern and Maidstone & District. Other versions were built, including 13 ft 5 in (4.09 m) for City of Oxford Motor Services, and the 14 ft 2 in (4.32 m) height allowed under later versions of the grant specification along with the 13 ft 10 in (4.22 m) convertible open-toppers for companies such as Hants & Dorset, Southdown and Devon General.

The chassis types are as follows:

The 1997 movie Spice World, featured a Bristol VR painted in Union Jack livery as the mode of transport around the UK. The bus used for filming was new to East Midland Motor Services (registered VTV172S) and was driven by Dennis the Bus Driver played by Meat Loaf. The interior scenes were filmed separately at the studio - the actual bus interior was gutted with only the driving cab and immediate surroundings used in the production.

The actual bus used in the film has been on permanent display as a visitors' attraction at Island Harbour Marina on the Isle of Wight, England since 18 July 2014. 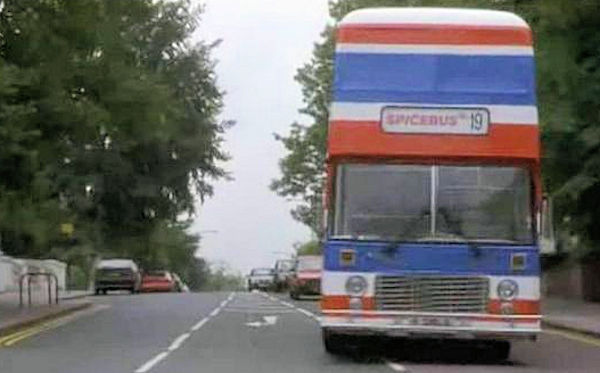