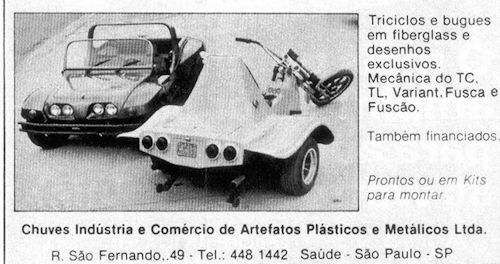 The company was based in São Paulo . In 1978, the production of automobiles with the brand name was Chuves . Production ended in the early 1980s with only small production.

One model was a VW LWB 4 seat buggy . An air-cooled four-cylinder piston engine from Volkswagen was mounted in the rear and drive to the rear wheels.

The open four-seater body made of fiberglass had a roll cage behind the front seats.  Strikingly, the four lights on the front of the vehicle.

In addition, a trike was also in the range.  fitted with a VW engine.