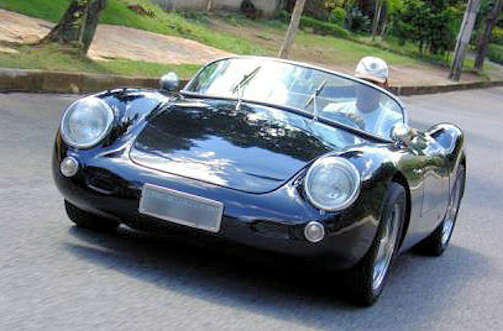 Amazonas Motos Especiais , short AME , was a Brazilian manufacturer of motorcycles and automobiles .

The company was based in São Paulo. In 1978 in plants in São Paulo and Manaus , the production of motorcycles.   The vehicles were also in the United States as well as Europe and Japan exported. 1986 there was a change of ownership.  From 1987, also emerged cars and kit cars . 1988 ended the production. Total originated about 700 motorcycles and a few cars. An air-cooled four - cylinder boxer engine from Volkswagen do Brasil with a displacement of 1600 cc propelled the vehicles.

In 1986, the replica of the Porsche 550 was presented at a motor show. The license came from American designer Chuck Beck. A tubular frame formed the base. the Spyder was mounted on a tubular chassis and had a laminated fiberglass body. The VW engine with a choice of 1600 cc, 1800 cc or 2160 cc was behind the seats in mid engine design the replica could be supplied complete, or in the form of a kit, always with a central engine mounted in front of the rear axle, production was planned a month from 10 to 16 vehicles. Already in the same year ended the production of this model, when Beck decided, the license to Chamonix NG Cars.In addition, the replica of a Ford Thunderbird was planned.