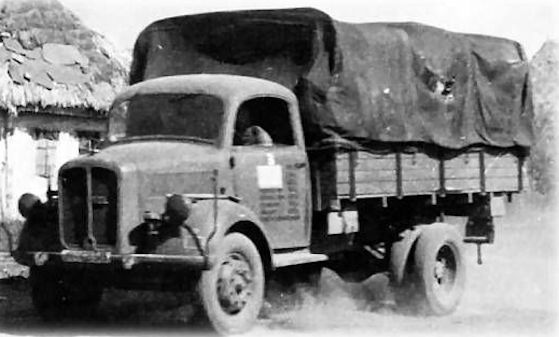 Borgward began truck production in 1937 and delivered vehicles with payloads of up to 5 tons until the outbreak of the war in 1939 , including the 3-tonne Borgward G. W. with a petrol or diesel engine.

A large part of the trucks were drafted by the Wehrmacht . Initially, the production of the previous truck program continued. However, Borgward, like the other truck manufacturers, was ordered from 1940 to restrict the variety of types and focus on the production of standard trucks with a payload of about 3 tons and simplified equipment.

As a "unit truck" ran as a successor from 1942, the 3-tonner with the official name Borgward B 3000 S / O with 3.7-liter gasoline engine and 78 hp and Borgward B 3000 S / D with 5-liter diesel engine and 75 hp, both six-cylinder, from the band. The four-wheel drive version also received the designation A. In the course of the further saving of material and raw materials, the design of the truck was increasingly simplified - so dropped the Borgward trademark, the diamond on the radiator grille , and it was instead of the cabin made of sheet steel, the unit made of wood placed.

Although the B 3000 proved itself in use, the lighter Opel Blitz , a 3-tonne of its competitor Opel, proved to be superior.

Borgward B 3000 A in the battles for Villers-Bocage on the invasion front in 1944. On the front axle, the differential gear of the four-wheel drive can be seen.

In addition to trucks Borgward also produced other military vehicles, including especially Halbkettenzugmaschinen , armored personnel carriers and load carriers . In total, about 30,000 trucks 3 t - 1944 were also built using forced labor - until the destruction of the factory by Allied bombing in October 1944. Plans to restart production in order to produce the Opel "Blitz" were no longer implemented, as Bremen was captured by British troops in April 1945.