Borgward P 100 was the factory-internal designation for a passenger car of the upper middle class of the Carl FW Borgward GmbH in Bremen Sebaldsbrueck. From 1959 to 1962, 2591 units were officially produced by the Grand Borgward (number of the Verband der Automobilindustrie : 2587). From the beginning of 1960, the P 100 was the first German automobile to be offered with air suspension . As of 1961, Mercedes-Benz also used such a system in its flagship 300 SE W 112 series .

The pre -model presented in September 1952 and internally called " Hansa Vierundzwanzighundert " was offered with a self-developed by Borgward automatic transmission, which turned out to be very susceptible to interference.

From 1955 had the only with notchback body available with automatic transmission 1615 kg heavy car a brake system with servo assistance , which until then improved insufficient braking effect. Because of the rear-hinged front doors (" suicide door ") was the entry in sufficient space, although convenient, but in parking spaces or garages by the far forward projecting lower door corner only possible with difficulty. From 1952 to 1958 only 1399 Hansa 2400 of all versions were produced. 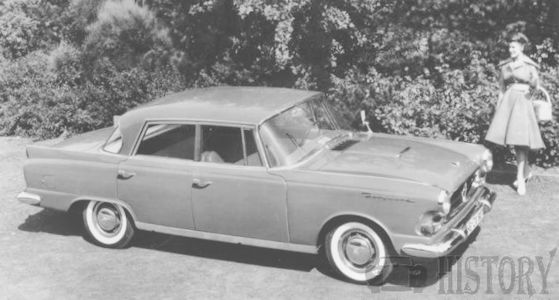 Development and technique of the P 100

The P 100 presented at the Frankfurt Motor Show in September 1959 had front-hinged front doors, a 12-volt system and could be equipped with a "Hansamatic" automatic transmission from Hobbs Transmission Ltd. on request . which was much more reliable than the automatic three-speed transmission of the Hansa 2400. The opposite the Hansa 2400 II Pullmanslightly shorter P 100 had a 17 cm smaller wheelbase and a smaller turning circle of 11.4 meters (Hansa 2400: 12 meters). Because of the 300 kg lower weight of the car with the same engine as in the last Hansa 2400 and the same engine power (100 hp) was more economical and with 160 km / h top speed by 5 km / h faster. He accelerated from zero to 100 km / h in 16 seconds.

As the first German production vehicle, the P 100 was also available from January 1960 with optional air suspension developed by Borgward. On each wheel sat an air bellows, which was filled by a compressor in the engine compartment via a reservoir. However, these bellows not only spring-loaded the vehicle, but also counteracted the lateral inclination when cornering or the front "immersion" during braking, so that the vehicle body always remained in the horizontal. The corresponding valves were opened or closed by a linkage from the wheel suspensions.

The brake system of the P 100 had an ATE T 50/24 brake booster, which was installed under the right front fender. cooling fins on the brake drums caused a good heat dissipation.

The initially only 46 liters capacity tank was increased in early 1961 to 60 liters, so that at a standard consumption of 12 liters per 100 km, the car had a range of nearly 500 kilometers.

The production started slowly: to the end of 1959 produced six P 100 came 35 cars in the first half of 1960, until the end of 1960 there were a total of 869 vehicles. The numbers remained low after the liquidity problems of the Borgward Group , which had become apparent in January 1961 . In the whole of 1961, 1680 "Great Borgward" were produced until the opening of the bankruptcy proceedings in September 1961. Under the direction of the bankruptcy administrator , there were still 38 vehicles in 1962.

The production facilities of the P 100 were sold in 1963 to the Impulsora Mexicana Automotriz SA in Mexico, but in 1964 the project collapsed for lack of capital. In 1966, a newly founded company group FANASA ( Fabrica Nacional de Automoviles SA) started a new start and produced by mid-1970 a total of 2,267 vehicles, which were sold there under the designation "230" (without tail fins and panoramic rear window) or "230 GL Pullman" ( by 10 cm extended version with tail fins and panoramic rear window) were offered. All vehicles there were built without air suspension. Planned was probably a variant "230 RS" with 125 hp. However, financial problems also ended production at FANASA.