The Borgward Hansa 2400 was a passenger car of the upper class , which the Carl F.W. Borgward GmbH built in Bremen from 1952 to 1958 as a hatchback and as a notchback sedan , each with four doors.

The unusual for her time hatchback was already in 1951 under the name Hansa 1800 as the upper rounding of the offer at the 34th IAA in Frankfurt to see. In 1952, however, a Hansa 1800 was presented as a more powerful successor to the Borgward Hansa 1500 . The serial production of the new model began in October of the same year under the name "Hansa Vierundzwanzighundert" with a nearly 2.4-liter six-cylinder engine.

The second form followed in 1953 in a wheelbase and overall length by 20 cm extended conservative notchback sedan with the name Borgward Hansa 2400 Pullman , which was exhibited at the IAA 1953 in Frankfurt am Main.

In 1955, the production of the hatchback version was discontinued and the notchback sedan grew in the course of a facelift once again by 15 cm in the total length to 481 cm. The engine power was also increased to 100 hp. The production of the Borgward Hansa 2400 ended in 1958 after 1399 copies. (The Association of the automotive industry mentions in his statistics with 1388 vehicles a little lower number.) The car was never profitable for its technical complexity for the manufacturer. Successor of the 2400 1959 became the "large Borgward" P 100 . 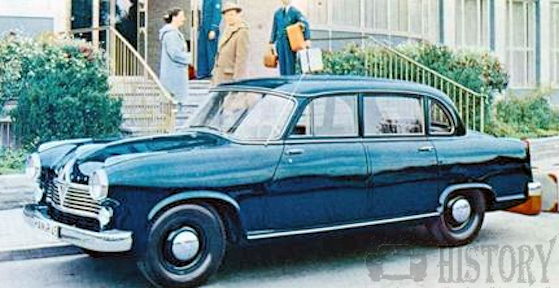 The Borgward Hansa 2400 had a four-door self-supporting all-steel body that could accommodate five to six people. Especially the hatchback version was considered "aesthetically and technically perfected". In addition, she was a drag coefficient of 0.363 unusually streamlined ( Borgward Isabella 0.442). As with the Hansa 1500 the fenders were included in the side panels, which still allowed a wide interior with an external width of "only" 1780 mm. The hatchback's rear doors were struck at the rear, the front doors of the "Pullman" or the notchback version also rear, the rear but in front. The trunk was accessible from the outside. The seats had foam pads and armrests. On the dashboard were "piano keys" (pushbuttons) for the starter flap, lighting, etc. The heating could be regulated separately for both sides of the car.On request, the "Pullman" was available with a cutting disc between chauffeur and passengers in the rear. A disadvantage found in both versions, the sweeping lower corners of the front doors that allowed only small opening angle in tight parking spaces or garages.

In the 1955 redesigned Hansa 2400 there were adjustable footrests for the rear passengers and the spare wheel was housed in a separate, accessible from the outside compartment under the trunk. To get to the spare wheel, the center piece of the rear bumper was folded down.

The Hansa 2400 had a built above the front axle water-cooled six-cylinder engine that's popular with throughout the construction camshaft and overhead valves. The cubic capacity of initially 2337 cc was reduced in March 1957 to 2240 cc. The engines of the first series produced an output of 82 hp (60 kW); From 1955 it was 100 hp (74 kW), which enabled a top speed of 155 km / h. A special feature was the hydraulically operated clutch.

Instead of the initial 3-speed transmission was from March 1953, a 4-speed gearbox available, just like the 3-speed gearbox with steering wheel circuit. In addition, Borgward offered a 3-speed automatic or a flow gearbox with torque converter . This automatic gearbox developed by Borgward proved to be extremely susceptible to interference and was probably one of the reasons why the Hansa 2400 had only a small sales success.