The Borgward Isabella is a car of the middle class , which the Carl F. W. Borgward GmbH in Bremen Sebaldsbrück built from 1954 to 1961. The standard two-door or three-door station wagon was the most successful model in the Borgward Group. From June 10, 1954, it was first produced under the name " Hansa  1500".

The later name "Isabella" was not the result of market research, but a spontaneous inspiration from Carl F. W. Borgward himself. Asked what should be written on the still top secret pre-production models when they make test drives in public transport, Borgward is said to have replied: " I do not care about that; writes my sake Isabella on it. " In 1957, the original code name was to be read in Borgward rhombus of the grille. The US company BorgWarner complained in early 1958 that the tip of the rhombus - Borgwards trademark - the company name on the hood in Borg and was could cause a confusion with his name. It threatened therefore with a complaint, whereupon the rhombus in the Isabella models reduced from mid-1958 and thus the optical separation of the company name was avoided.

The modern conception and pleasing appearance of the Hansa 1500 (Isabella) were enthusiastically welcomed at the 1954 show. The car met the public taste and was from the first day on a sales success. After a development period of only ten months, the model initially had many small defects, but these were gradually phased out.

The Isabella was a redesign, which technically and externally had no commonality with the previous model Hansa 1500/1800. Carl FW Borgward himself had designed the body and made plasticine models on a scale of 1: 5. For the further development Walter Dziggel, Hermann Lünsmann and Hermann Böse were responsible. The new self-supporting body with bulges on the wheel arches, emphasized door sills and a lateral chrome trim strip was not as strict as the smooth pontoon body of the previously built Borgward Hansa 1500, which had been introduced in 1949 as the first German car rebuilt after the war, and it was slightly lighter. Even otherwise, Isabella differed from its predecessor. The chassis had no leaf springs and the engine a smaller stroke ratio (1.13 instead of 1.28) and higher compression (7 instead of 6.3). 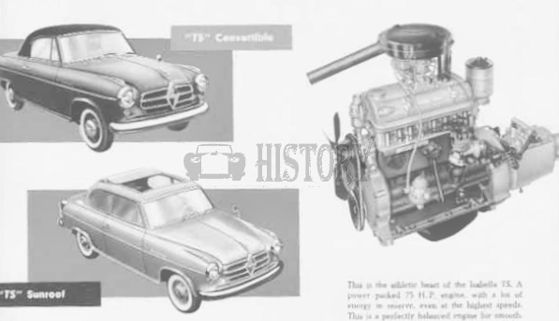 The front wheels of the Isabella are hung on double wishbones with coil springs and stabilizer (as in the racing car Borgward RS ). Engine and front axle are sitting on a subframe. The rear of the Isabella has a swing axle with push rods and coil springs.

The four-cylinder in- line engine with triple-bearing crankshaft and parallel hanging valves has a side camshaft , which is driven by a spur gear with gear made of fabric-reinforced phenolic resin ( Novotex ). The intake pipe is part of the cylinder head; the carburetor is flanged onto the valve cover. New at that time was the hydraulically operated clutch . The four-speed gearbox with steering wheel gear is fully synchronized .

The Isabella was with 7,265.00 DM more expensive than the Opel Rekord or the Ford 12 M , but significantly cheaper than a Mercedes 180 . In the first year of production Borgward produced 11,150 Isabellas.

Further development and variants of Isabella 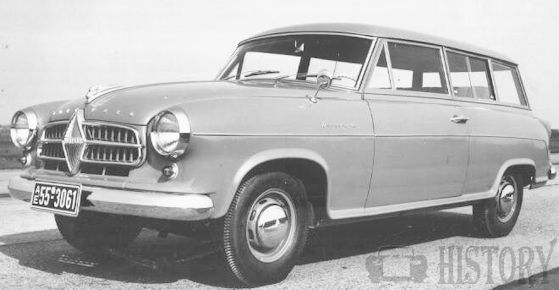 In the fall of 1955, the two-door sedan a three-door station wagon and a convertible were set aside. In addition, the Isabella TS with more engine power (55 kW = 75 hp instead of 44 kW = 60 hp) brought to market. Externally to recognize was the TS model on the appropriate lettering at the rear and parking lights on the front fenders. The rear door of the station wagon ("combi") was hinged on the left in the first version. However, it proved to be impractical and was changed in the course of construction in a top-hinged tailgate.

In December 1956 and the model year 1957 were the initial cooling slots under the radiator grille and the lettering "Hansa 1500" in the rhombus was replaced by "Isabella". For the model year 1958, the car received a dashboard with stylish tape tachometer, which replaced the small round instruments of the first generation. In August 1958 and model year 1959 the rhombus was scaled down and the narrower tail lights of the Hansa 2400 were taken over for Isabella. Recent changes before the end of production were in January 1961 a new dashboard - again with round instruments - and a decorative grille behind the radiator opening.

The convertible was designed by Johannes Beeskow , who had already designed a coupe based on the Borgward Hansa 1500. It was built by Karl Deutsch GmbH in Cologne. The low rigidity of the self-supporting body without roof caused difficulties. Extensive and expensive were the interventions in the original construction. 9,950.00 DM cost the convertible.

When in 1956 Isabella's sales declined by almost a third compared to 1955, Carl Borgward decided to build a "beautiful car" with a shortened roof. The result was the Borgward Isabella Coupé, from which initially four prototypes came to the public and aroused the interest of the press. One of these handmade prototypes Borgward gave Christmas 1956 to his wife Elisabeth, who drove him until the 1980s. The series production of the coupe (with the TS engine), of which about 9500 to a maximum of 10,000 pieces were built, began in January 1957. Due to the short roof structure and the 12 centimeters lower height, the car seemed long and elegant, although he with 4, 40 m was not longer than the sedan. The engine that accelerated the Coupé from 25 km / h in fourth gear to the top speed of 150 km / h

Karl Deutsch in Cologne converted this model into a cabriolet, but kept the lettering "Coupé" at the rear. The coupé convertibles cost between 15,600 and 17,000 DM.

On request, the coupe was available with the tail fins popular in his time and included, compared to the standard version larger turn signals.

Only for export, especially to the USA , a pickup was produced.

The Bremen police used the Isabella as a patrol car , the Hessian police , including in Frankfurt am Main as speedometer.

As a taxi , only two-door deliverable Isabella was hardly suitable. However, two four-door conversions are known, one of which was seen at the Borgward meeting 2014 in Bad Neuenahr .

From the beginning Borgward used Isabella in motorsport. At the Carrera Panamericana in October 1954 , Adolf Brudes started with the standard 60-hp engine in the class of "European Touring Cars to 2 liter capacity" in which the factory team of Alfa Romeo with several 110 hp "1900 TI" competed. In addition, drove seven VW Beetle with 30-horsepower engine. According to the balance of power Brudes finished sixth behind five Alfa Romeo and before the VW beetles, all of which made the 3,070 km long route. Brudes drove the race with an average of 113 km / h. In the following years, the Isabella was with upgraded engines in touring car racingto see, among others, in the supporting program of the Grand Prix of Europe on August 6, 1961 at the Nürburgring with Jochen Neerpaschand Robert Franz (pseudonym) on the steering wheel.

In 1961, the Borgward Group became insolvent. Many vehicles were on heap; Nevertheless, the Isabella remained until 1962 in production. A total of 202,862 units were built until the end of production. The production facilities were sold to Mexico, where some of these vehicles were manufactured during the 1960s. The position taken by the Isabella filled out BMW from 1961 with the BMW 1500 .