The Borgward Hansa 1500 is a mid -size car of Carl FW Borgward GmbH in Bremen Sebaldsbrück and was the first German car redesign after the Second World War . The first car was on October 13, 1949 from the tape.

In March 1949, Borgward had presented the car at the 19th Geneva Motor Show . The Hansa in 1500 was mainly the first German series-produced saloon after the war with pontoon body and turn signals instead of the formerly standard Winker as direction indicators .

In August 1950 Borgward scored twelve international records with a built on the basis of the Hansa 1500 racing car in Montlhéry, France . The car had been designed by the engineering firm INKA (engineering design consortium) consisting of a group of former Auto Union technicians and engineers around August Momberger . Momberger built an aerodynamic streamlining made of aluminum and Karl-Ludwig Brandt increased the engine output to 66 hp. The so-called INKA car was piloted by August Momberger, Adolf Brudes , Heinz Meier and Karl-Heinz Schäufele.

The Hansa 1500 had initially a four-speed gearbox with middle circuit (also called "stick circuit ") and from the end of 1950 a steering wheel circuit . via a propeller shaft were rear wheels are driven .

The wheels of the Hansa 1500 are suspended individually : on the front on the upper wishbones and on the lower transverse leaf spring, on the rear on a pendulum axle with transverse leaf spring guided by the handlebars . The lever shock absorbers of the first series were replaced in late 1950 by telescopic shock absorbers . The foot brake acts hydraulically on all four wheels, the handbrake mechanically on the rear wheels. 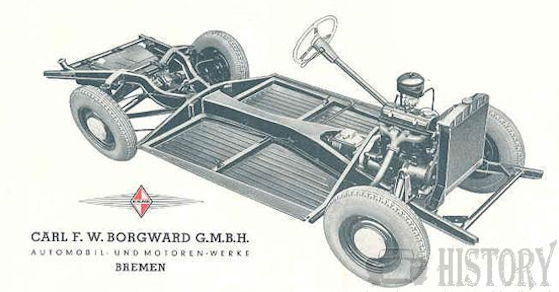 The Hansa 1500 has a two- or four-door all-steel body, which is built on a front and rear forked central tube frame with cross members and floor panel. The fenders are included in the side panels, so despite a relatively small outer width (1620 mm) a larger interior compared to the competing models of Mercedes-Benz and Opel was achieved. In the press it said: "The pontoon body offers the advantage that almost the entire body width is used for the interior and so can comfortably accommodate six people. She has very smooth, easy to manufacture exterior surfaces and can be carried streamlined. " The doors are hinged at the front, the trunk is accessible from the outside; the bonnet is folded up from the side, left or right as needed.

An eye-catcher inside is the white steering wheel with three spokes, each consisting of four thin metal rods (similar to the steering wheel of the first Porsche models). At the front, the Hansa 1500 with steering wheel gearshift, just like the rear, has a continuous bench so that three people can sit side by side. However, in the first version with a stick mechanism, there were two individual seats at the front, as the approx. 70 cm long curved gear lever and the voluminous gear tunnel made it impossible to place third.

In addition to the two- and four-door sedan, there was the Hansa 1500 as a three-door station wagon, as a two-door sports coupe, as a five-seater convertible with two doors and a two-seat sports convertible with 2400 mm shortened wheelbase and a length of 4165 mm.  Both convertibles built by May 1952, the body shop Hebmüller in Wülfrath. 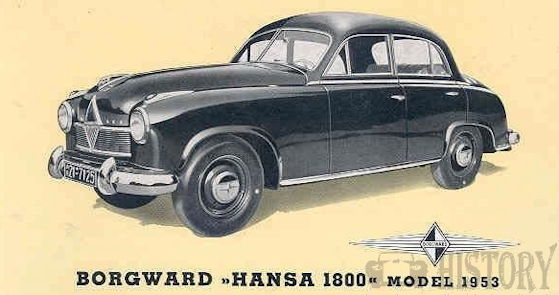 1952 received the Borgward Hansa a 1.8-liter engine (1758 cc) with 60 hp (44 kW) at 4200 / min. The cylinder bore was increased to 78 mm, the stroke remained at 92 mm. The three-speed gearbox initially built to this engine was replaced in March 1953 by a synchronized between third and fourth gear four-speed gearbox. In addition, an automatic transmission was available. As maximum speed, the sedan reached 136 km / h.

Together with the larger engine, the car received the type designation Hansa 1800 . Outwardly, the new model was recognizable by long turn signals on the front fenders (at 1500 under the headlights), moldings under the side windows and Borgward rhombus on the hubcaps.

In addition to the sedan Kombi, Cabriolet and Sport cabriolet were still offered.

1953 appeared the Hansa 1800 with four-cylinder diesel engine. With the same engine displacement as the gasoline engine, the diesel engine produced 42 hp (31 kW) at 3400 rpm; Top speed according to factory specification 100 km / h. After the 260 D and 170 D Mercedes-Benz and the record of the Hanomag Hansa 1800 was the fourth German car with a diesel engine.