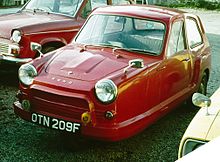 Sharps Commercials Ltd was a British car maker. It changed its name to Bond Cars Ltd in 1963. The company was taken over by the Reliant Motor Co Ltd of Tamworth, Staffs in 1970 who quickly closed the Preston factory, transferring the spare parts business for the Bond Minicar, 875 saloon, 875 Ranger van and Equipe models to a firm called Bob Joyner & Son in Oldbury in the English Midlands. Reliant nevertheless continued to use the Bond name until 1974 on Bond Bug models made at their own Tamworth plant.

Sharp's Commercials began production of an economical three-wheeled car early in 1949. It was called the "Bond Minicar" (retrospectively to be called the Mark A) and was powered by a single-cylinder two-stroke Villiers engine of 122 or 197 cc. Bodywork was mostly aluminium, though some later models used fibreglass for parts of the car. It proved very popular at the time owing to post-war economies.

The Minicar moved on through several different incarnations, culminating in the "Mark G" in 1961. Convertibles were offered, as were van and estate versions. The engine was upgraded, first to a single-cylinder 250 cc and then to a 250 cc twin-cylinder Villiers 4T (optional on the Mark G). The engines were essentially motorcycle units and therefore had no reverse gear. However, this was a minimal inconvenience, because the engine, gearbox and front wheel were mounted as a single unit and could be turned by the steering wheel up to 90 degrees either side of the straight-ahead position, enabling the car to turn within its own length.

Reverse gear of a sort was offered on later models, but using this involved stopping the engine and starting it backwards. This was done by reversing the Siba Dynastart unit, a device which doubled as both starter and generator. It operated as a starter motor when the starter button was pressed but when the engine was running it generated power instead and recharged the battery.

The Equipe GT was Bond's first four wheel car, a sports car, with fibreglass two door body. Essentially it was a Triumph Herald chassis cab, complete with bulkhead, windscreen and doors, with the Triumph Spitfire 1147 cc engine The doors had slightly revised glass, to accommodate the fibreglass, fastback roof and rear assembly. The Herald's forward hingeing bonnet was replaced with a revised version giving an excellent, clean, sportscar appearance. This was replaced by the GT4S model in 1964, offering 4 seats, and an opening boot lid. In front, the beautiful, Italianate bonnet styling was spoiled by the addition of Reliant Scimitar, quad headlights, flanking a, cut-down version of the original Herald grille. A bonnet scoop was also added. A 1296cc engine was introduced in 1967. During the life of this car, it was not uncommon to see Triumph Heralds, modified by the fitting of a Bond Equipe bonnet, as all the side body lines matched perfectly. Less common were Bond Equipes, bizarrly, fitted with Herald front ends.

In 1967, three years before the take-over by Reliant, the new Equipe 2 Litre was introduced. Based on styling proposals by Trevor Fiore, the doors had new skins and all external traces of the Triumph Herald were gone, unless you paid particular attention to the windscreen surround. The Reliant Scimitar headlamps were retained, but now incorporated into a, stylish, full width grille. In the rear, gone were the Lucas, triple-bullet tail-lamps and this elevation began to resemble the, later, Reliant Scimitar SS1, which would not be along for another twenty years. This model had the six-cylinder 2-litre Triumph Vitesse chassis and engine, uprated to the Mk.2 version in 1968, at which time a convertible version was also offered.

The Bond 875 was a three-wheeler with a rear-mounted four-cylinder 875 cc four-stroke, Hillman Imp-derived Coventry Climax engine. It was dropped from the range in 1970, when Reliant took over the company, as it was a superfluous competitor to Reliant's own products.

The Bond Bug was perhaps the best known vehicle to bear the Bond branding. This was a three-wheeler with a Reliant 700 cc four-cylinder engine and a top speed of 75 mph (121 km/h). Most were finished in bright orange, and with a body styled by Tom Karen of Ogle Design, were a fashion statement in the 1970s. Entry was gained by swinging the roof forwards on a front hinge. The concept and test vehicle, for this design, was simply a Reliant Regal with the rear of the body cut away to just aft of the back wheels. This could be seen, for many years, in the yard of the Tamworth factory, by anyone looking through the railings, from the canal towpath.