Billed extensively as the 'new-line' Minicar, the final evolution of the Bond Minicar was still based to a large extent on the bodyshell of the Mark F.Nevertheless, a revised shape fibreglass roof, new doors, new windscreen with opening quarter lights and bigger wheels largely transformed the cars appearance. However, although the car was similar in layout to the Mark F, almost everything mechanically about the Mark G was different with very few components carried over. 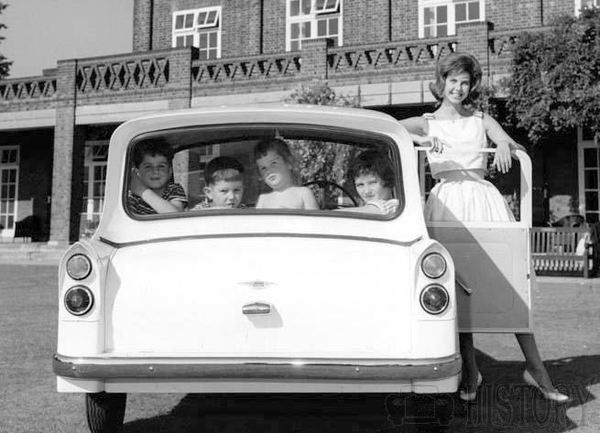 Steel supports around the quarter lights allowed the windscreen to be both more steeply raked and moved forwards to provide more interior room. This also allowed a properly sprung bench-type rear seat to be fitted capable of seating two adults. The front seats were adjustable for position and the passenger side now folded much further forward than on previous models to allow easier access to the rear, though the doors were still felt to be too narrow for easy entry. Controls were similar to the Mark F, but the fuel tap was now moved from beneath the bonnet to under the dash. Doors were now lockable and included wind up windows.

Production of the Mark G began in August 1961 and initially the Bond 250 G Minicar was the only version available. The new style roof offered several inches more headroom and incorporated a backward-slanted rear window of the type popularised in the UK by the Ford Anglia. This was initially mirrored by nominal fibreglass tailfins inserted into the aluminium rear wings before the wings became entirely made from fibreglass.

Under the bonnet, the car utilised the new Villiers Mk 35A unit designed specifically for the car. A development of the 9E, this incorporated numerous mechanical refinements to improve strength and reliability albeit slightly to the cost of overall power, now rated at 11.5 bhp (9 kW; 12 PS) at 4,500 rpm. Rear suspension was completely revised, with trailing arm units controlled by Armstrong dampers. The rod and cable brake systems of previous cars was also replaced by Lockheed hydraulic brakes acting on all three wheels. Two further models were added to the range in 1962, the Bond 250 G Estate and the Bond 250 G Ranger. The estate featured a large hatchback, hinged at the roof. Inside, the rear seats could be folded flat reversed (so the passengers faced the rear or removed entirely.On the Ranger version the rear seats and rear side windows were omitted. 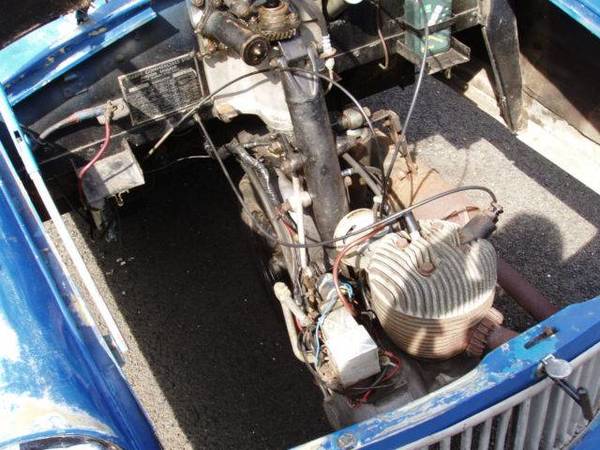 Although public response at the 1962 Motorcycle show remained encouraging, the changes to purchase tax meant there was now a much less significant price difference between the Minicar and other small cars and in November production was scaled back with consequential job losses.

In a bid to stem declining sales, a 2-seat economy version of the Minicar was introduced in October 1964, the Bond 250 G Tourer. This basically used the saloon car body, but with a larger rear deck incorporating an opening boot lid, a folding hood, new fibreglass bonnet, plain door panels, no chrome side trim and non-opening quarter lights. In standard form it came with the 35A engine, but the side trim and 4T engine were available as an option.

Saloon and Tourer production ceased in late 1965, whilst production of the Ranger and the Estate ended in the spring of 1966. 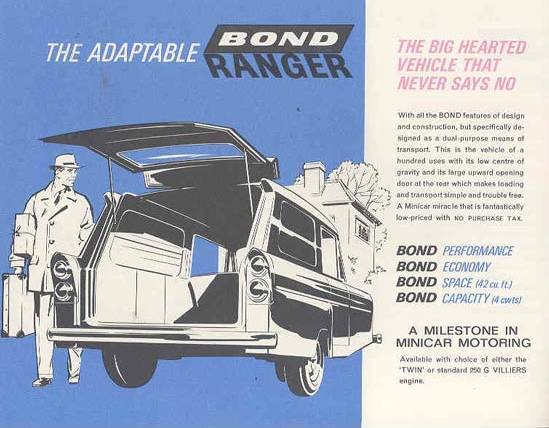