The 1958 London Motorcycle show was used to launch the Minicar Mark F.As with the change from the Mark C to D, the designation was primarily to denote significant mechanical progression from the Mark E rather than any notable difference in the cars external appearance. Three versions of the new model were shown, the Mark F Tourer, the Mark F Saloon Coupe and the Mark F 4-Seater Family Saloon. The Tourer and Coupe were identical to the Mark E versions but the 197 cc (12 cu in) Villiers 9E engine was replaced by a 247 cc (15 cu in) Villiers 31A, Though this engine boasted 12 bhp (9 kW; 12 PS) at 4,500 rpm (an increase of 3.6 bhp (3 kW; 4 PS)), the fuel consumption, dimensions and weight of the unit were almost identical to the 9E. Tests during the summer of 1958 included climbing a 28% gradient "without a struggle" and stop and restart tests two-up on the same slope. Top speed was given as 55 mph (89 km/h) with an average fuel consumption of 60 mpg-imp (4.7 L/100 km; 50 mpg-US). The 4-Seater Family Saloon was identical to the Coupe from the outside, but inside, the rear deck was cut back to allow space for a forwards facing hammock style rear seat, just big enough for two children. Unlike the similar seats in the Mark D Family, this could be completely detached for load carrying. All three models offered optional reverse gear. 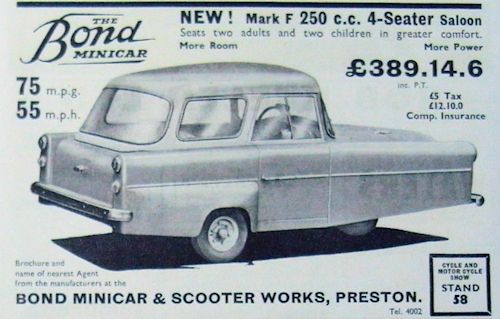 A fourth model, the Bond Ranger light van was introduced in March 1960. This utilised the body with the cut out behind the front seats from the Family Saloon and married it with a similar hardtop roof without side windows, but with the addition of an opening flap around the rear window. Very much an economy model, in standard form it came finished in primer with topcoat as an optional extra. A few cars of this type were recorded on factory production records as a Van rather than a Ranger. This is believed to denote that they were only fitted with a single front seat to increase load capacity, much like the 1952 Minitruck. UK law at the time also meant that this type of lightweight, single-seat three-wheeler could be driven unaccompanied on learner L-plates without the need to pass a driving test. 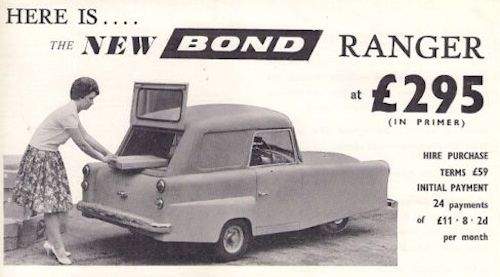