The Bond Bug is a small British two-seat, three-wheeled sports car built from 1970 to 1974 in Great Britain .

Vehicle design was by Tom Karen , who was employed by Ogle Design . The vehicle captivated with its It is a wedge angular shape. To get in and out, the upper part of the body made of plastic was folded up to the front of the microcar, with a lift-up canopy and side screens instead of conventional doors. It was only delivered in an orange color, with the exception of a small series of Bond Bugs, which were released in a bright yellow.

Reliant manufactured the vehicle under the Bond Bug name after buying out Bond Cars Ltd , first in Preston , then in Tamworth The original concept was explored by chopping down a production Regal vehicle and used some Reliant Regal running gear on a newly designed chassis .

The drive unit  is the front-mounted  and came from the Reliant Regal a light-alloy four-cylinder unit and had a displacement of 700 cc. In the last few years of production, the 750 cc engine from the Reliant Robin was also offered.

Three variants were offered. In addition to the basic model, there was an E variant, which was equipped with a heater, among other things. The ES model was delivered with even better equipment, a more powerful engine and low-profile tires.

The  Reliant  unit which protruded into the passenger cabin. At launch 29 bhp (22 kW; 29 PS) was claimed for the less expensive 700 and 700E models. The more up-market 700ES incorporates a redesigned cylinder head which permitts the compression ratio to be increased from 7.35:1 to 8.4:1. This provided a power increase to 31 bhp (23 kW; 31 PS) as well as improved torque for the then range topping 700ES.

The Bond Bug 700ES also offers more supportive seats as well as more padding over the engine cowl, twin mudflaps, an ashtray, a rubber front bumper and a spare wheel

The British Webster Motor Company manufactured a number of four-wheel vehicles from 1990 to 1991, the design of which was based on the Bond Bug.

The car enjoyed an upbeat launch, at which Reliant's Ray Wiggin stated: "The fact it has three wheels is quite incidental. It's a new form of transport. So now, in fact, we think it's going to appeal to a much wider section of the market than we originally envisaged."

The Bug was available in a bright orange colour, although six white Bugs were produced for a Rothmans cigarette promotion - one of which was also used in an advertisement for Cape fruit and at the moment a Dulux Bond Bug is said to be under commission. Its fame was helped along by a distinctive Corgi Toys die-cast toy car. Although it had a fairly short production run (1970 to 1974), it has a dedicated following today.

In contrast to the image of three-wheeled Reliants as being slow, the Bond Bug was capable of some 76 mph (126 km/h), well in excess of the UK national speed limit (70 mph), and comparable to small saloon cars such as the basic 850 cc Mini (72 mph) and the Hillman Imp (80 mph). However, it could not match the speed of the Mini Cooper S (96 mph) or larger saloons such as the Ford Cortina Mark III (104 mph in the highest-powered variant), or even aging models of two-seater sports cars, such as the MG MGB (103 mph) or the Lotus Seven, where by 1970 even the lowest-powered version of the S4 could reach 108 mph.

The Bond Bug was sold as being fun to drive, with the low seating position giving a similar exaggerated impression of speed as in a go-kart, while the actual speed was similar to that reached by high performance cars only a few years earlier (indeed, earlier versions of the Lotus 7 had a top speed of 76 mph right up till 1968, and their trim level, e.g. side curtains instead of windows, was also similar).

The Bug was, however, not cheap. It cost £629, while a basic 850 cc Mini, a four-seater much faster round corners but with considerably inferior acceleration, cost £620. Also, while a basic Lotus Seven (with much faster acceleration and good cornering) cost £945 in 1970, it was also available as a complete knocked down kit much more cheaply, partly because of more favourable tax treatment.

Throughout the new millennium, the car has enjoyed an increased following through publicity with appearances from stars such as Robbie Williams in the "Millennium" promo and the infamous 118 guys.

Tom Karen oversaw the design and production of Luke Skywalker's landspeeder from Star Wars: one of the models was built upon the chassis of a Bond Bug - the wheels hidden by mirrors angled at 45° to the ground.

The Wheeler Dealers television program purchased and restored a Bond Bug 700ES and, after completion, sold it on to make a profit. Since then, the Bug has been on display at the 2011 NEC Classic Car Show in Birmingham, where Wheeler Dealers presenters Mike Brewer, Edd China and Mechanic/Technical Assistant Paul Brackley were reunited and signed the Bug.

A Bond Bug (Reg No: ABN 583L) was featured in many of the earlier episodes of Hollyoaks as a vehicle belonging to one of the characters in the series. 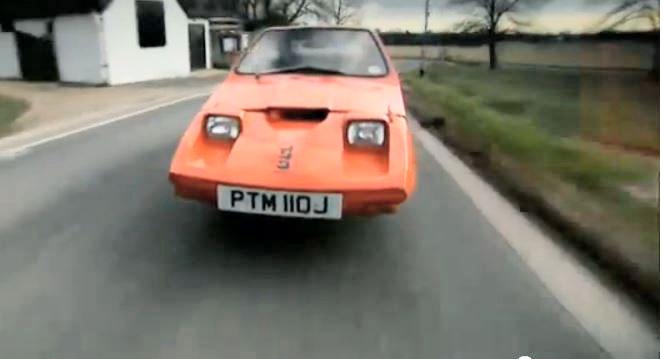