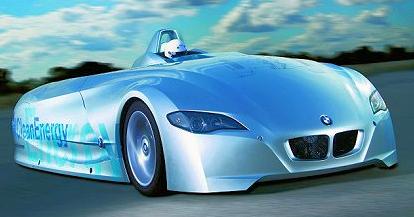 The BMW H2R ("Hydrogen Record Car") is one of the first of a new breed of racecars adapted to run on liquid hydrogen fuel. Conceived and developed in the relatively short time of 10 months under the direction of Dr. Raymond Freymann, it has set nine international speed records at the Miramas Proving Grounds in France.

On the high-speed track at Miramas the BMW H2R set nine international and FIA-ratified records with hydrogen combustion engines.

In 2007, Olafur Eliasson was commissioned by BMW to create the sixteenth art car for the BMW Art Car Project based on the H2R. Eliasson and his team removed the automobile's alloy body and instead replaced it with a new interlocking framework of reflective steel bars and mesh. Layers of ice were created by spraying approximately 530 gallons of water during a period of several days upon the structure. On display, the frozen sculpture is glowing from within. Called Your Mobile Expectations, the vehicle was on special display in a temperature controlled room at the San Francisco Museum of Modern Art from September 8, 2007 to January 13, 2008.