The first-generation of the BMW Z4 was designed by Danish BMW-designer Anders Warming from mid-1998 to March 1, 2000. The Z4 was introduced at the Paris Auto Show in 2002, and went on sale in November of the same year for the 2003 model year. It is a physically larger, completely redesigned successor to the Z3. Initially, it was only available as a roadster with the 2.5L or 3.0L inline six-cylinder engines. Warming's design was controversial, as were many BMW designs of the time produced under the watchful eyes of BMW chief designer Chris Bangle.

The Z4's design addressed many criticisms of the preceding Z3; the Z4 is larger, and has a significantly stiffer chassis. The Z4 features a strut type front suspension like its predecessor. The rear suspension, however is considerably different from that of the Z3, which was based on that of the E30 BMW 3 Series. Instead of a semi-trailing arm suspension, the Z4 uses a more advanced multi-link suspension.

The Z4 used lightweight materials to offset the increased weight over the smaller Z3, such as aluminum hood and suspension components, magnesium roof frame. Run flat tires removed the need for a spare tire, which in addition to saving weight, allowed for a larger boot.

Advanced aerodynamics yield a drag coefficient of 0.35 and a relatively calm passenger compartment when the top is down.

The SMG transmission was offered in addition to the more usual manual and automatic transmissions.

BMW unveiled a concept coupé version of the Z4 at the Frankfurt Motor Show in 2005. The design of the Z4 and Z4 coupé has variously been ascribed to Anders Warming, Chris Bangle, the controversial former BMW Head Designer, and Adrian van Hooydonk, current BMW design chief, and BMW designer Tomasz Sycha. The company announced in 2005 that the coupé would be available for production including the return of the M Coupé. The production cars were introduced at the New York Auto Show in April 2006.

The E86 Coupé features a fixed hard-top roof which yields additional torsional rigidity—32,000 N·m (24,000 lb·ft) per degree of body twist on the coupe compared to 14,500 N·m (10,700 lb·ft) per degree on the roadster. This additional rigidity improves driving dynamics and corner handling. The roof now features a 'double bubble' contour which serves as an aerodynamic aid and offers more headroom than the roadster with top closed. The coupe has a sleek fastback rear window that slopes down to an integrated spoiler shaped to deliver downforce to the rear axle at speed.

The vehicle was designed by Anders Warming.

In 2006, BMW updated the Z4 line by introducing the M Roadster, and later the M Coupe, with the vaunted S54 "M" engine. The standard cars received the new N52 I6 engines. The N52 features a magnesium block construction, which consists of an aluminium interior for the cylinders, and an outer magnesium block. The engine features BMW's Valvetronic variable valve timing system for increased performance, are considerably more powerful through the middle of the rev range, and also improve fuel economy noticeably. A final benefit of the N52 engines is that they improve handling and turn-in due to the decreased weight over the nose of the car. This is particularly noticeable when compared to the Z4 M, which continued with the heavier S54 iron block engine.

In addition to the powertrain updates, BMW made mild revisions to the styling of the Z4, added several electronic features, and increased the brake size on the 3.0si models.

The 2006 BMW Z4 received a number of updates including a revised exterior, more powerful engines and improved interior features. Highlighted by a new front bumper ensemble with a larger air intake, rectangular foglights and front side reflectors, the exterior also received new wheels, rear bumper and taillight designs. The interior was fitted with a new aluminium trim, shift knob for automatic transmission and new colors. The 2.5si replaced the 2.5i and the 3.0si replaced the 3.0i. Power for the 2.5si was 218 bhp while the 3.0si got 261 hp (195 kW) and 232 lb·ft (315 N·m) of torque. A 6-speed manual transmission was standard with an optional 6-speed automatic. 17-inch wheels were standard on both trims and the Sport Package also features new wheels as well.

The Z4 M shares the same engine as the E46 BMW M3, but due to gearing differences, is marginally slower than the M3. The North American version is 3 horsepower shy of the M3's 333 horsepower. However this is better than the Z3 version, which, while using the same engine, was all the way down to 315 horsepower. 0-60 mp/h takes 5.0 seconds, and the top speed is limited to 250kph or 155 mph.

The M coupe's production began at the Spartanburg BMW plant in Greer on the 4th April 2006.

The last of the first-generation Z4 (Z4 3.0si Roadster in Space Grey) rolled off the production line on 28th August 2008. 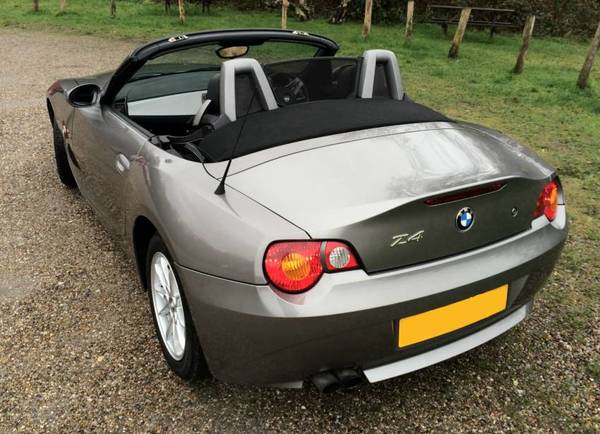