The BMW F32 series is the first generation of the BMW 4 Series range of compact executive cars. It is the successor to the E92 model of the 3 Series range.

The vehicle's wheelbase (2,810 mm) is 50 millimetres longer than that of the existing 3 Series Coupe, while 45 mm has been added to the front track (1,545 mm) and 80 mm to the rear track (1,593 mm). The BMW Concept 4 Series Coupe is 44 mm broader than its predecessor, its roof line is 16 mm lower (1,362 mm) and it is also longer (4,641 mm). Other features include hexagonal full-LED in twin circular design, double swage line below the side windows (from BMW 3 Series), Air Breather behind the front wheels, 20-inch light-alloy wheels in three-dimensional multi-spoke design, L-shaped rear lights, two-tone Black and Schiaparelli Brown interior trim, light contrast stitching on leather upholstery, leather-covered cup holders, inline 6 cylinder engine, interior Natural Chestnut fine wood trim strip. Car is valued at over $154,000. The base model starts at ≈ $44,900.00.

The vehicle was unveiled in 2013 North American International Auto Show.

The design was based on BMW Concept 4 Series Coupé.

The vehicles were set to be unveiled in 2013 Frankfurt Motor Show.

The vehicle was unveiled in Tokyo Motor Show 2013, followed by LA Auto Show 2013.

The M4 Coupe and its five competitors are the RS5 Coupe, C63 AMG Coupe, 911 Carrera S Coupe, RC Coupe and the CLA45 AMG.

The vehicle was unveiled in official ITR tests in Budapest.

The vehicle was unveiled in 2014 MotoGP Qatar race.

Also joining the convertible and the coupe is the Gran Coupe. Like the BMW 6 Series Gran Coupe, it's a coupe that has 4 doors, also known as a liftback. However, unlike the 6-er Gran Coupe, the pillar, according to spy shots, is like the 3-Series GT, consisting 4 pillars - A-Pillar, B-Pillar, C-Pillar and D-Pillar, also similar to the Audi A7 and the Audi A5 sportback. Although similar pillar layout as the 3-Series GT, it is sleeker, like its coupe brother (F32).

The vehicle was unveiled in 2014 DTM tournament. 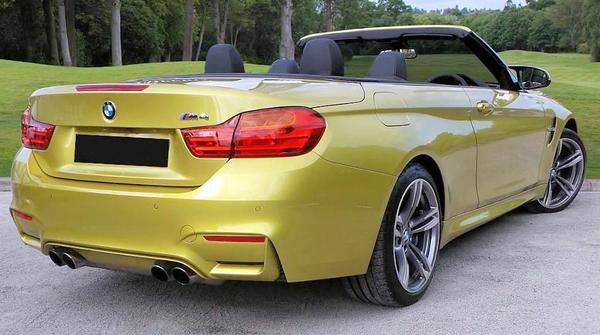