The BMW 2 Series is a compact executive car produced by BMW. The 2-Series has several different body styles. It is available as a compact coupe that replaced the 1 Series coupe, or as a convertible model that replaces the 1 Series convertible in the BMW lineup. There is also a new Compact MPV body style, which BMW refers to as an Active Tourer. The 2-Series Active Tourer is unrelated to the coupe and convertible models. While it shares the 2-series name, it is built on a totally different front wheel drive platform that is shared with the 3rd generation MINI Cooper dubbed UKL1. The 2-Series currently competes with new models from Audi and Mercedes-Benz, the A3 Sedan and the CLA Class, respectively, until BMW releases its own front wheel drive/ all wheel drive compact sedan.

Unlike the 1 Series, the 2 Series feature sleeker headlamps and a more aggressive grille and front fascia.

Although it was the successor of the 1-Series coupe, it is continuing the BMW 02 coupes as a successor in that segment. The name, 2-Series, is based on BMW's rationalization of its model designations reserving odd numbers for 4-door sedans and even numbers for 2-door coupes and coupe-like cars. Currently at launch, there are the basic models 218d, 220d, 220i, 225d, and the range-topping BMW M235i internationally.

BMW 2 Series Active Tourer is the first front-engine, front-wheel-drive layout vehicle sold under BMW vehicle brand, designed to compete directly with the Mercedes-Benz B-Class. xDrive will be offered, as an option. The design is based on the BMW Concept Active Tourer, and is mechanically-related to the MINI Countryman, also built by BMW. 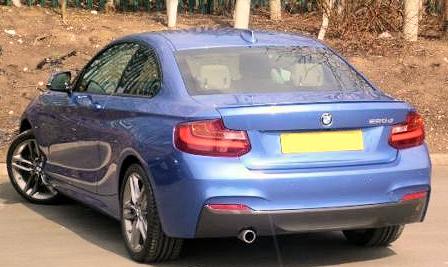