The first-generation BMW 1 Series is a compact executive car produced by the German automaker BMW since 2004, when it replaced the BMW 3 Series Compact range as the smallest and cheapest vehicle (depending on the engine model) in the BMW range. As of May 2013, the 3-door and 5-door hatchbacks have been superseded by the F20 and F21 models, however the E82 coupe and E88 convertible variants are still in production.

The 1 Series accounted for nearly one-fifth of the total sales in 2008.

The 1 Series was developed alongside the E90 3 Series. Design work was done by Christopher Chapman in 2001, which was frozen for series production at the end of 2001. The 2002 CS1 Concept previewed the 1-Series design elements at the 2002 Geneva Motor Show.

The 1 Series was launched globally in Autumn 2004 and shares many structural, chassis, powertrain, hardware and electronic elements with the larger E90 3-Series. The model was started to provide a lower point of entry into the BMW range as the 3 Series moved gradually up-market. Initially launched as a five-door hatchback, a three-door version was also launched in July 2007.

The North American introduction of the coupe and cabriolet was during the second quarter of 2008, which was credited for helping BMW overtake Lexus as the top luxury brand.

The first-generation 1 series shares over 60% of components with the E90 3-Series., including front and rear suspension.

In 2007 the 1 Series lineup expanded considerably with the introduction of a three-door hatchback, coupe and convertible body styles. There was also a mid-generational refresh as engines were upgraded and more fuel efficient, along with new bumpers and other exterior and interior updates.

In 2011, the coupé and cabriolet bodies gained a facelift. Exterior changes to the model were minor headlight and taillight revisions, new front/rear bumpers and minor revisions to the interior. The only new engine was the N55 which replaced the N54 twin-turbo, with power and torque output remaining the same. Even though many engines are same, the facelifted 1 Series fuel consumption is slightly higher in some models such as the 123d, and slightly lower in some models such as the 120i.

The 1 Series Coupé was marketed in the US as a successor to the BMW 2002, a two-door from the 1970s known for its light weight and relative high performance at the time and its long bonnet, slim cabin and short rear.

In the 1-series hatchback commercial, Kermit the Frog was shown driving a BMW 1 Series around in a desert making figure eights, showcasing the car's agility.

Jeremy Clarkson and other journalists raised aesthetic complaints about the 1-series, adding at the end of his review for the Sunday Times 'The 1-series is crap.'

Critical response has changed in recent years with the introduction of the Coupé, and convertible model - which have been described as 'returning BMW to its roots', and the 135i has been described as the successor of the original E30 M3 of the 2040. Clarkson himself awarded the 2008 model five stars, and had the following to say: 'The 135 coupé is the best car BMW makes.'

The BMW 118d (not sold in North America) won the 'World Green Car Award' in 2008 as a performance-oriented car with CO2 emissions and fuel consumption comparable to Toyota Prius.

In 2006, a BMW 120d modified with a BMW customer racing kit entered by "Schubert Motors" placed 5th at the Nurburgring 24 Hours in a field of 220 cars, including the more powerful Porsche 911 GT3, BMW M3 and Lamborghini Gallardo.

Four-cylinder petrol, available in 3-door hatchback and 5-door hatchback body styles. In early 2006 the 5-speed manual transmission was phased out in favor of the 6-speed gearbox available across the rest of the range.

Four-cylinder petrol, available in 3-door hatchback, 5-door hatchback and convertible body styles. In early 2006 the 5-speed manual transmission was phased out in favor of the 6-speed gearbox available across the rest of the range.

2007-10 model year BMW 135i coupe/cabriolet models were equipped with the N54 biturbo inline-6 engine, mated to a six-speed manual or optional six-speed "Steptronic" automatic transmission. For the 2011 model year onwards, the powertrain was changed to the N55 single (twin-scroll) turbo inline-6 (making the same horsepower and torque output), paired to a six-speed manual or optional 7-speed dual-clutch transmission. The short-lived 1 Series M Coupe retained the N54 biturbo inline-6, albeit in a higher state of tune.

The differential fitted to the 135i is the first in the world to use double-helical ball bearings. These bearings operate at a lower operating temperature (which can be reached more quickly), due to the reduction of fluid required in the differential. 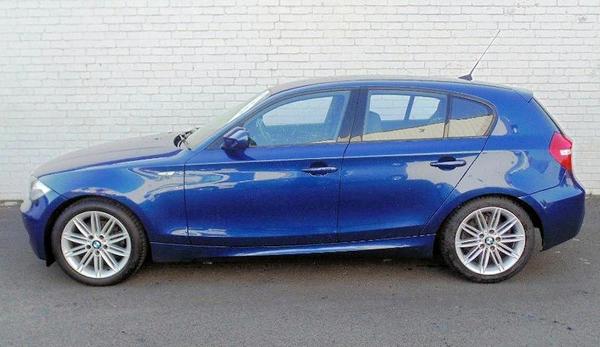 The BMW 1 Series M Coupe ("1M Coupe") is a high-performance version of the BMW 1 Series Coupe, developed by BMW's motorsport branch BMW M. While BMW naming convention would have called the car the "M1", the name "BMW 1 Series M" was used instead, to avoid confusion with the original BMW M1.

BMW M boss Dr. Kay Segler officially announced the making of the M variant of the BMW 1-Series Coupé on July 9, 2010, via an official YouTube video and press release On December 9, 2010, BMW officially announced all details of the car in the media. The variant was marketed as a spiritual follow-up to the famous E30 M3.

BMW was originally going to release the 1M Coupé as a limited production model of 2,700 units. Then due to overwhelming demand, the company lifted the cap and produced a total of 6309 cars until production ended in June 2012. Nevertheless, production of the 1M Coupé stopped in June 2012, with 740 units sold in the US and a further 220 sold in Canada. Total 6309 cars sold worldwide.

The 1M was featured on Top Gear on 26 June 2011 and recorded a time of 1:25.0 around the Top Gear test track The 1M was met in the media with enthusiastic reviews, Jeremy Clarkson likening it, as a breakthrough model, to the original Volkswagen Golf GTI. It also received "Richard Hammond's Car of the Year 2011" award in Top Gear magazine.

The BMW 135is was a tuned version of 135i's N55 twin-scroll turbo straight six making 320 hp and 317 lb-ft of torque, increases of 20 and 17 versus a standard 135i. The 135is also receives an upgraded cooling system with a more-powerful radiator fan and an auxiliary radiator, plus a M Sport Body. The performance of the 135is is close to that of the limited-production 2011 BMW 1 Series M.

The BMW 135is (E82) coupe/cabriolet was sold only in Canada and the United States, as the European market received the next-generation 1 Series, the 2013 BMW M135i (F20) 3-door and 5-door hatchback. Despite the differences in chassis, both the 135is and M135i share the same engine, however for their optional automated transmissions the 135is has a 7-speed dual-clutch gearbox while the M135i has an 8-speed automatic. 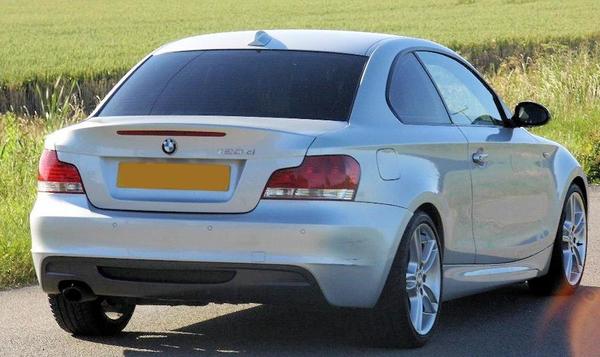