BMW had a difficult time re-establishing themselves as volume producers of motor cars after the Second World war, principally because their Eisenach factory was now behind the Iron Curtain in East Germany, and the hardware and tooling for building their late-1930s cars was beyond them. Their 500-series cars were large, heavy and luxurious, did not sell in huge quantities (BMW, indeed, were not at all equipped to make them in such numbers), and were not therefore profitable. It was to reverse this process that the factory began making small cars, first the tiny Isetta 'bubblecar', then the strange 600 model with its front-opening door
(inherited from the Isetta), and finally - in 1959 the 700 series.
The 700, announced first as a coupe with close-coupled four-seater accommodation, was an entirely new chassis, though the air-cooled flat-twin engine was an enlarged and developed version of that already being made for the 600. In many ways it was the last desperate throw by BMW to gain volume (and respectability) before they achieved Bavarian government finance and managed to put the outstanding 1500/1600/1800/2000 range of saloons on to the market at the beginning of the 1960s.

The 700 Coupe had a neat and simply styled notchback coupe style, in pressed steel, built as a monocoque on a unit-construction 'chassis'. Four-wheel independent suspension was a feature, and although the car looked as if it might have a conventionally-mounted engine in the nose, the flat twin unit was actually positioned in the tail, behind the line of the rear wheels. In spite of a weight distribution which put no less than 63-per-cent of weight over the rear wheels, the handling was surprisingly civilised, and when the engines were tuned to their limit the cars could be surprisingly effective in their class on the race circuits. 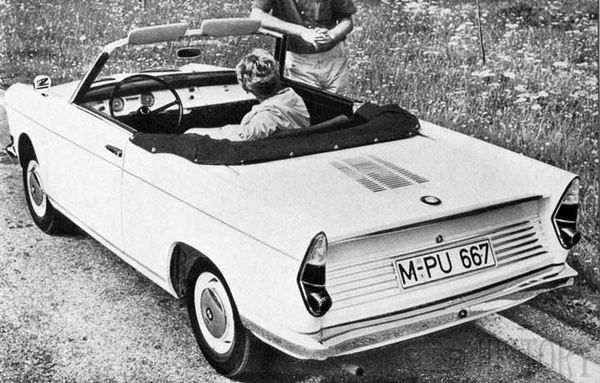 No significant changes were made to the design over the years apart from a 6.3in, increase in wheelbase in 1964, and it was withdrawn in 1966 when the successful large BMWs came to dominate the scene at Munich,

The first variant of the 700 to appear after the original coupe and saloon was the 700 Sport in August 1960. Available only as a coupe, the Sport used an uprated engine with a pair of Solex carburetors and a 9.0:1 compression ratio. This brought the power output to 40 horsepower (30 kW). The Sport also had a rear anti-roll bar. A ribbed oil pan was used to reduce the oil temperature of the more powerful engine. The 700 Sport was renamed the 700 CS in 1963.

The 700 Cabriolet was introduced shortly after the 700 Sport, and was available only with the Sport's 40 horsepower engine.. The convertible body was made by Karosserie Baur of Stuttgart 2,592 convertibles were built.

A Saxomat semi-automatic transmission was offered as an option on 700s from September 1960.

Production of the BMW 700 ended in November 1965. By that time, the successful New Class cars had established themselves in the marketplace. High demand for these larger cars with larger profit margins led BMW to stop making economy cars. BMW eventually returned to the economy car market in 2002 with the Mini.

An attempt to transfer the rights to body production and export markets of the 700 to Autocars Co. in Israel in 1965 fell through. E. Illin Industries had earlier tried to start an enterprise in assembling 700s in Israel, which resulted in four 700s being assembled there in April 1963. 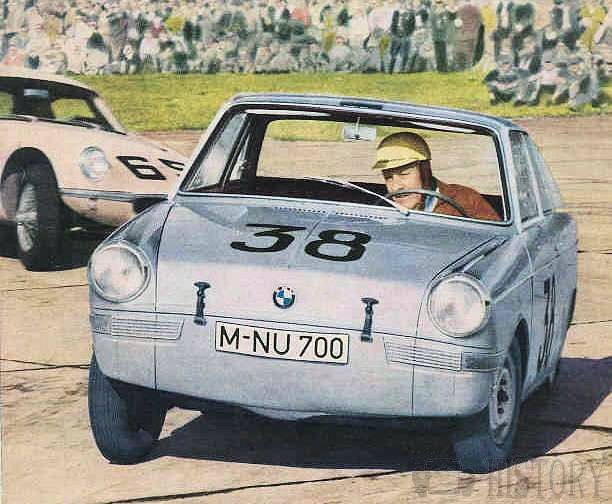 The 700 RS was a racing car based on the 700. It had a tubular frame chassis, special, lightweight, aerodynamic bodywork, and a double overhead camshaft engine tuned to 70 PS (51 kW; 69 hp). Hans Stuck campaigned the 700RS with success.BMW 700 RS was first used on June 18, 1961 at the Rossfeld hill climb for use. At this premiere, Hans Stuck sat at the wheel of the Roadster with exactly 2 meters wheelbase. This had a tubular space frame with an aluminum body, a 70-hp vertical shafts -Motor and weighed less than 600 kg. Depending on the ratio, the BMW 700 RS achieved a top speed of 150 to 200 km / h.

After Walter Schneider had ended his active career as a motorcycle racer at the end of the 1959 season , he returned a short time later on four wheels in motorsport events. He immediately won at all races for which the BMW race director nominated him. Just one year later, he justified the hopes set by the factory and became the German circuit champion in 1961. With the BMW 700 RS, Walter Schneider became 1961 German mountain champion on the Schauinsland course near Freiburg, in Davos he won the Swiss mountain championship in the same Year.The BMW 700 RS remained in service until 1964 and served as a development vehicle, racing car.