The BMW 600 is a four-seat microcar produced by BMW from mid-1957 until November 1959. Partially based on the BMW Isetta two-seater, it was BMW's first postwar four seat economy car. It was not a sales success, but it began the design process for its more successful successor, the BMW 700.

BMW needed to expand its model range, but they did not have the resources to develop an all-new car with an all-new engine. Therefore, it used the Isetta as starting point for a new four seat economy car.

As a result, the 600 used the front suspension and front door of the Isetta. The need to carry four people required a longer frame, a different rear suspension, and a larger engine. A new perimeter frame was designed, using box section side members and straight tube crossmembers.The rear suspension was an independent semi trailing arm design; this was the first time BMW had used this system. The chassis had a wheelbase of 1,700 millimetres (67 in) a front track of 1,220 millimetres (48 in), and a rear track of 1,160 millimetres (46 in).

The 600 was powered by the 582 cc (35.5 cu in) flat-twin engine from the R67 motorcycle/sidecar combination. This engine, which delivered 19.5 horsepower (14.5 kW) at 4,500 revolutions per minute, was mounted behind the rear wheels. A four-speed manual gearbox was standard, while a Saxomat semi-automatic transmission was available. The 600 had a top speed of approximately 100 km/h.The air-cooled two-cylinder boxer engine with spur gears driven central camshaft and V-shaped hanging valves is installed longitudinally behind the rear axle. The cooling fan is behind the engine and is driven directly by the crankshaft, above it sits the air filter. The gearbox with mechanically operated single-disc dry clutch and differential is flanged on the front of the engine. It has mid gear , four synchronized forward gears and one reverse gear. The rear wheels are driven by two shafts, each with two rubber hinges.

Access to the rear seats was by a conventional door on the right side of the vehicle.

The sales figures for the 600 did not meet BMW's expectations. During production from August 1957 to 1959, about 35,000 were built. This is attributed to competition with more conventional cars, including the Volkswagen Beetle.

The 600 played a direct role in the design of its successor, the BMW 700. Wolfgang Denzel, the distributor of BMW cars in Austria, commissioned Giovanni Michelotti to prepare concept sketches based on a lengthened BMW 600 chassis. Denzel presented the concept, a 2-door coupe with a slanted roof, to BMW's management. The concept was generally well received, but objections were raised about the limited passenger space. BMW decided to produce two versions, the coupe, and a 2-door sedan with a taller, longer roof.

Another legacy of the 600 was its independent semi-trailing arm rear suspension. This was BMW's first use of this suspension system and, with the exception of the BMW M1, it was used on every BMW production automobile until the 1990s. It was eventually supplanted by the "Z-axle" multi-link suspension introduced with the BMW Z1 in 1988.The last BMW cars with semi-trailing arm suspension were the BMW Compact and the BMW Z3.

The BMW 600 was noted in magazine and journal articles as an example of space efficient design. It was noted for carrying four people within a shorter length than that of the Mini. 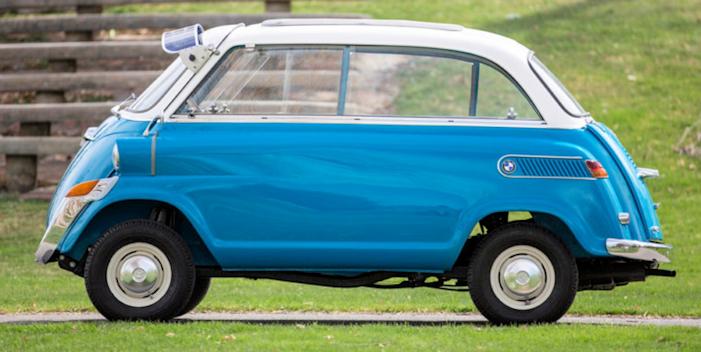