In 1927, Fahrzeugfabrik Eisenach, which manufactured automobiles under the Dixi marque, entered a contract with the Austin Motor Company to manufacture the Austin Seven under licence. The first fifty Eisenach-built Sevens were right-hand-drive cars assembled in September 1927 from parts provided by Austin's factory in Longbridge. By December 1927, Dixi had begun building their version of the Seven, the left-hand-drive Dixi 3/15 PS DA-1, built from parts made by Dixi. The 3/15 designation was derived from a taxable horsepower rating of 3 PS with an actual power output of approximately 15 PS (11 kW; 15 hp) The DA-1 designation stood for Erste Deutsche Ausführung (First German Version)

The main differences between the BMW Dixi 3/15 DA-1 and the contemporary Austin Seven were the addition of Bosch shock absorbers, the placement of the driver's controls on the left side of the vehicle, and the use of metric fasteners. 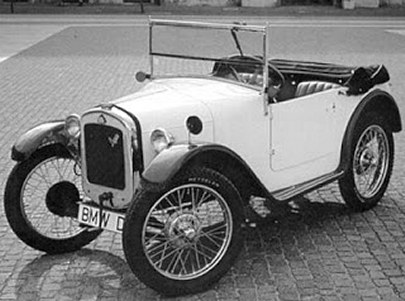