The F10 M5 was released to the public at the 2011 Frankfurt Motor Show, and went on sale in November 2011. Compared to the previous M5, BMW's aim was to create a more sophisticated vehicle." Nonetheless, the F10 M5 is significantly heavier, has synthetic engine noise played through its audio system and has a lower top speed compared to the naturally aspirated E60 M5 V10 it replaces. It is important to note that it did hold the title of world's fastest production sedan upon release as was common with earlier iterations of the M5.

For the 2014 model year, the BMW M5 Competition Package was made available. Compared to the standard M5, the Competition Package has the following changes; horsepower increased 560 to 575 (torque remains flat at 500 lb-ft), and a revised suspension (bushings, springs, dampers, sway bars) which lowers the car 10 mm. Direct rivals include the 2014 Mercedes-Benz E63 AMG S Model. 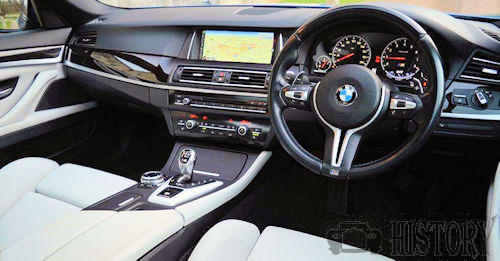 A dual clutch transmission is used, with the option of a 6-speed manual gearbox for the US market only.

In an effort to lower the curb weight of the new M5, which is heavier than the E60 it replaced, BMW partnered with SGL group, a carbon fiber manufacturer. Despite this, the F10 still weighs significantly more than the E60 model and has faced criticism from some quarters for this, its relative lack of engine note and lack of steering feel compared to its immediate predecessor.

The F10's debut was at the Frankfurt Motor Show in September and later in North America at the LA Autoshow on 18 November. The new 2012 BMW M5 also made an appearance before September at the M Festival at the Nürburgring 24 Hours endurance race in Germany on 23 June, the Goodwood Festival of Speed, and has been shown to select members of the M Driving Experience at the Salzburg Ring in Austria. The car has a reported lap time of 7:55 around the Nürburgring race track. 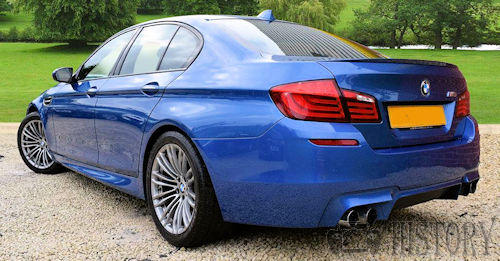