The E39 M5 had a significant increase in power and was produced in much greater numbers than the previous generations. Unlike its predecessors, the M5 was produced on the same assembly line as the regular 5-series models at the Dingolfing factory in Germany.

Introduced in 1998 at the Geneva Motor Show, production did not begin until late October of that year. A total of 20,482 E39 M5s were made from 1999 to 2003. BMW M produced three versions of the E39 M5, the European LHD and RHD versions, and the North American specification version.

It is the same transmission as the one used in the E39 540i, but some changes were made to cope with the extra power produced by the S62 engine. The differences consist of a reinforced clutch, a rear differential utilising a shorter 3.15:1 ratio, and a limited slip differential with 25% maximum locking.

Like all V8-powered E39 models, the E39 M5 was equipped with a recirculating ball steering system, regarded as less tactile than the rack and pinion set up of other E39s. Overall steering ratio was reduced to 14.7 from 17.9. It featured a Servotronic vehicle-speed-sensitive power assist which provides two levels of resistance controlled via console mounted Sport button. The Sport button also adjusted the electronic throttle butterflies for faster throttle response. The E39 M5 is equipped with four-wheel vented disc brakes measuring 345 mm (13.58 in) in diameter in front and 328 mm (12.91 in) in diameter in the rear. On European-specification models, the rotors are of a "floating" two-piece design for reduced risk of cone distortion. Their lower unsprung weight improves ride quality and traction on bumpy surfaces as well. Anti-lock brakes, EML (fly-by-wire) throttle control and Dynamic Stability Control (DSC) were standard. 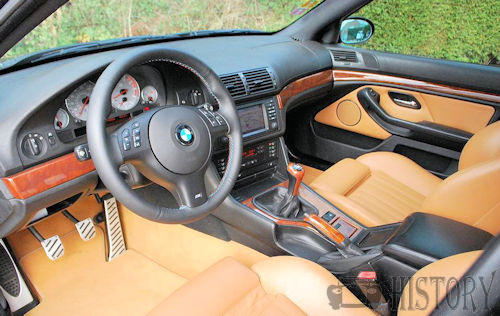 During its five years in production, there were some cosmetic changes in 2001 to include:

For the subsequent two model years, changes were limited to the addition of new exterior colors (from 9/01 production) and the upgrade to a DVD-based navigation system (from 9/02 production).

In NA, 2002 and 2003 models have the 'Auto Headlamps' feature as standard, they were previously optional..

The official BMW of North America statement (mentioned in the 2003 brochure) for the acceleration time from 0–60 mph is 4.8 seconds. It is electronically limited to a top speed of 250 km/h (155 mph).

Although an E39 M5 Touring was considered, and at least one prototype was constructed (in Titanium Silver with a Black Exclusive leather interior), BMW M decided not to produce an E39 M5 Touring due to financial considerations. In February 2010, as part of BMW's 25th Anniversary of the M5, they revealed this prototype M5 touring along with an E34 M5 Cabriolet, which also was never produced (a Cabriolet model would be spun off as part of the E63/64 BMW 6 Series and M6 for the next generation of the 5 Series and M5).

Since the start of production the entire in-car entertainment system (Radio Function, Navigation System, Television and Telecommunications systems) is based on a very flexible automotive computer system, IBUS.As a result the E39 models can all be easily upgraded with the newest BMW technologies including BMW's Bluetooth System, the DVD based Navigation system, as well as BMW's CD changers that play MP3s. 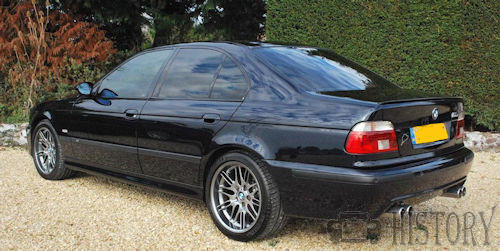 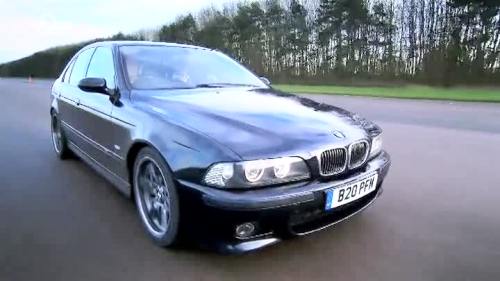