The E60 M5 was introduced in 2005, with a V10 engine intended to link the car with the BMW Sauber Formula One team The E60 M5 was the world's first production sedan to feature a V10 petrol engine. As with some of its predecessors, the E60 variant of the M5 was both the quickest and fastest 4-door sedan in the world at the time of its release. 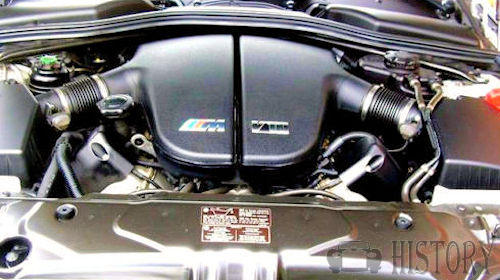 The multiple award-winning S85 engine produces 373 kW (500 hp) and 520 N·m (380 lb·ft) of torque. The engine and transmission were designed from scratch for this particular model, they are not based off other models.

The BMW M5, along with the E63/64 BMW M6, were designed to use the new Getrag SMG III single-clutch seven speed semi-automatic transmission, that performs gear shift in 65 milliseconds. Gerd Richter, the head of BMW M, described the decision to use a single-clutch sequential manual gearbox as "True, the dual-clutch system has a smoother automatic mode, and it performs seamless upshifts. For a 7-series, this may be the way to go. But an M car should always combine efficiency with emotion. That's why there are six shift speeds to choose from, from velvet glove to iron fist. That's why we cut the torque into seven slices. That's why we added special features like a hill holder, a designated drive program for steep climbs and descents, and a downshift assistant, which briefly dips the clutch to avoid destabilizing wheel spin."

Based on North American demand, BMW announced in October 2006 that a 6-speed conventional manual transmission would be available in North America; this became the base transmission in these markets while SMG III is an option. The 6-speed manual M5 was marginally slower in certain tests, since the dynamic stability control could not be disengaged unlike the SMG version.The release of a Service Bulletin in November 2007 for a retrofit allowed DSC to be disabled as well as the function being implemented into the introduction of the 2008 model year M5 as well as the M6.The SMG III includes the "Launch Control" feature. However, the US spec vehicles have a reduced launch control RPM to 1500 from 4000.

The M5 features several Formula One inspired engine and transmission controls. There is launch control which allows maximum performance standing starts automatically. The Getrag SMG III single-clutch semi-automatic transmission has the option of changing to either automated or manual, as well as the speed at which shifts are completed (there are 11 shift programmes in total forming what BMW calls Drivelogic). Manual shifting can be done with either a console shifter, or the steering wheel mounted shift paddles, both of which are fitted to all SMG M5s. The console shifter is the type used on manumatic transmissions; tipping it backward (toward the "+") shifts up, while a forward tip (toward the "-") shifts down. The shifter can be moved to the left to access neutral and reverse. The car also features a "power" button on the navigation panel (labeled "M") which offers access to three modes: P400 (limiting the engine to 400 PS (294 kW; 395 bhp) for daily driving use), P500 (unleashes the full 507 PS (373 kW; 500 bhp)), and P500 S (for full power and sharper throttle response, selectable only from the "M Drive Settings" in the iDrive menu). P400 is the default start-up mode, the P500 modes are preselected using iDrive and then activated from P500 S using the "M" button.

BMW stated the car to reach 0-to-62-mph in a time of 4.7 seconds (though this has been bettered in several published road tests ranging from 4.1 to 4.5 seconds) and an absolute (de-limited) top speed of 205 mph Motor Trend's comparison test found that while the E55 AMG had recorded a faster 0–60 mph time of 4.2 seconds versus the (inhibited) US-launch control equipped M5's 4.5 seconds, the M5 had superior driving dynamics.

In the Australian publication Wheels magazine in July 2005 recorded a 0–100 km/h time of an early, 2004-built E60 M5 of 4.4 seconds. The E60 M5 Sedan shared its underpinnings with the E63 M6 Coupe, which is longer overall but has a shorter wheelbase, with the M6 also being lower to the ground and slightly lighter with a carbon fibre roof.

The E61 M5 Touring was introduced in 2007, only the second M version of the 5-Series Touring after the E34. It shares the same drivetrain with its saloon sibling, and serves as a rival to the Audi RS6 Avant and Mercedes-Benz E63 AMG Estate. The Touring was never offered for sale in North America. 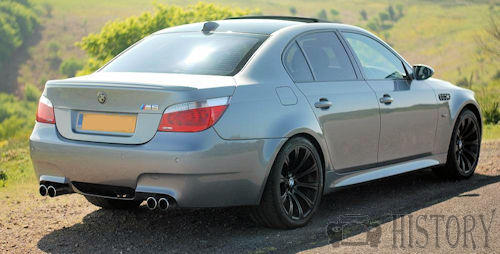