The car was unveiled in the Red Square in Moscow (Russia) on 8 July 2008, and later in 2008 Los Angeles International Auto Show.

740d xDrive was added in September 2010. The optional comfort seats in the rear compartment are now also available in a three-seat version.

In 2010, the North American lineup was added with the ActiveHybrid7. The ActiveHybrid7 is the first BMW with automatic transmission to feature an Auto Start Stop function avoiding idle speed operation of the engine when at a standstill or in traffic jams. 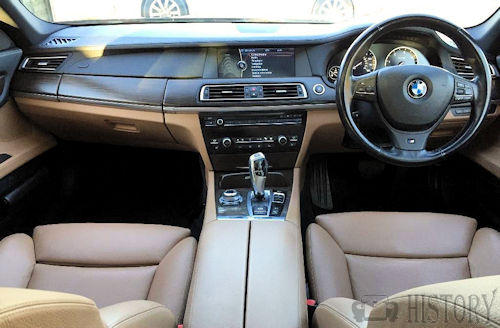 In the 2011 model year, the Alpina B7 and BMW 740i/Li were added. BMW initially did not have plans to sell the 740i/Li in the United States market; however they responded to requests from their American dealers who were impressed after test driving the Euro-market 7 Series. US models of 740i and 740Li went on sale in April 2010 as 2011 model year vehicle. For the Hong Kong market there is also a special version called the "740Li Vantage", which does not include TFT screens for the back seats, navigation system and comfort seats, and is HK$200,000 lower than the original.

The BMW Concept 7 Series ActiveHybrid is a concept model that uses the engine from 750i, but adds an electric motor rated 20 PS (15 kW; 20 hp) and 210 N·m (150 lb·ft) torque. Electric motor is integrated into the transmission housing replacing alternator and starter. Other features include auto start stop, 8-speed automatic transmission. The hybrid system was based on the 2-mode hybrid from Daimler AG. The regenerative braking unit includes 12V Absorbent Glass Mat batteries, running in parallel to 120V electrical network for electric motor. BMW claims it improved fuel consumption and reduced emissions by 15% over the non-hybrid model, despite weighing 221 pounds (100 kg) more. The car's exterior profile was designed by Karim Habib, Team Leader, Advanced Design for BMW in Munich, Germany.

BMW has also announced the F03 7 Series as their High Security line, including the 750Li High Security and 760Li High Security. Both of them were certified with BRV 2009 and VR7 ballistics protection. The non-transparent sections have been certified as having VR9 levels of protection. This is the first set of cars to be granted such high levels of security. It included undercarriage armour, 6 cm safety glazing at multi-layer laminated glass

The production version of the ActiveHybrid 7 has a wheelbase which has been increased by 14 centimetres.

The production model of the ActiveHybrid 7 was premiered at the 2009 Frankfurt Auto Show, and shown again later at the Monaco Yacht Show 2010. The US model went on sale in spring 2010.

It is a limited (200 units) version of BMW 7 Series limousines supplied by BMW Group for the wedding of HSH Prince Albert II of Monaco. It included metallic black body, six-cylinder inline engine.

Alpina Burkard Bovensiepen GmbH has produced the ALPINA B7 Bi-Turbo performance variant, also known as the BMW 750i Alpina B7, for the F01/02 7 Series commencing with the 2011 model year. The Alpina B7's engine is assembled by hand at Alpina's facility in Buchloe, Germany, before being shipped to BMW for installation, and the assembled vehicle is then sent back to Alpina for finishing touches.

Alpina's modifications to the standard N63 include high-performance pistons and reinforced cylinder heads to withstand the additional stress from a higher compression ratio. A larger intercooler, with a 35-percent increase in surface area, is fitted to lower intake temperatures. An additional radiator lowers coolant temperatures, and external coolers are added for the engine and transmission oil. The electric fan is also upgraded to increase airflow through the new high-performance components. To move more oxygen through the engine, larger and lighter turbochargers (the vanes measure 44 mm in diameter) are fitted to keep the whole package running smoothly and Alpina engine management software increases boost to 14.5 psi (1.0 bar vs. the standard engine's 0.8 bar) and recalibrates both stability- and traction-control with more aggressive settings. The blowers exhale into three air-to-liquid intercoolers, an arrangement that helps maintain maximum airflow even during long lapping sessions at a racetrack. There is also a bigger (2.7-inch) dual exhaust system that vents gasses out the back through the rear apron.

A ZF six-speed automatic sport transmission with heavy-duty gears (taken from ZF's transmissions for trucks) is found in the B7. The B7 also features a choice of regular or long-wheelbase and/or rear-wheel drive or xDrive.

The vehicle was unveiled in 2010 Chicago Auto Show, and went on sale in Spring of 2010. Production version went on sale as 2011 model year vehicle, which includes standard- and long-wheelbase editions.

Beginning in autumn 2011, M Sport package option is available for BMW ActiveHybrid 7. BMW ConectedDrive is available. BMW Night Vision with pedestrian recognition includes additional visual and audible alerts to warn the driver even more effectively if pedestrians or cyclists are about to move into the car’s path. The new Real-Time Traffic Information function works in conjunction with a navigation system to give the driver extremely precise information on the traffic situation on motorways, country roads and selected city routes. The new Apps function allows reception of Web Radio stations and in-car use of online services Facebook and Twitter.

The V12 engine for the F01 760i/Li was redesigned as a twin turbo 6.0L (BMW N74) in order to maintain its status as the flagship of the range. The 2010 BMW 760Li is priced similarly and has matching performance with the 2010 Mercedes-Benz S63 AMG, however the 760Li is positioned more as a cruising limo while the S63 is a hardcore sports sedan. The BMW 760Li is also less expensive and faster than the 2010 Mercedes-Benz S600 (equipped with a 5.5L biturbo V12 engine Unlike previous generations of the 7 Series, the V12 engine is now only available in the long-wheelbase model.

Canada models include only xDrive vehicles.

It is an armoured version of BMW 7 Series with VR7 and VR9 resistance class.

The vehicle was unveiled in GPEC 2012. 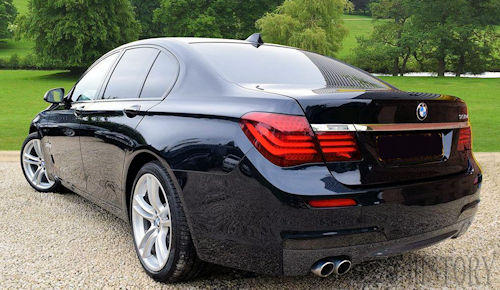