The BMW E23 is the first BMW 7 Series luxury car, produced by the German automaker BMW. Replacing the BMW E3 large sedan, the E23 was produced for ten years from 1977 to 1987 and was replaced by the BMW E32 7 Series in 1986. Production for the L7 continued in the United States for another year, eventually getting fully replaced by the long wheelbase versions of the E32.

All E23 7 Series models (with the exception of the 745i) were built with the 12-valve M30 six-cylinder engine as used in the older E3 and E9 cars. Although most E23 engines were fuel-injected, two models (the 728 and 730) were available with a Solex four-barrel carburetor until 1979, when they were replaced by the fuel-injected 728i. Early fuel-injected models used the Bosch L-jetronic system while later models used the more advanced digital Bosch Motronic system.

The E23 7 series cars were very upscale and sophisticated for their time. They were the first BMWs fitted with service interval indicators, a 'check control' that alerted the driver to various system faults, and complex climate control systems. On-board computers and anti-lock braking system (ABS) were optional on early models but later became standard features. Also, later models (1985–1986) offered an optional driver's air bag. A variety of options included leather upholstery, several types of wood trim, power seats, seat heaters, and power windows and mirrors. Four-speed and five-speed manual gearboxes were available (depending on the year) and an automatic transmission was also available.

A minor styling update in 1983 affected the 'nose' of the car (the front 'kidney' grilles, valance/spoiler, bumpers etc.) as well as the dashboard and instrument panels which received updates plus (in the UK) the 735i received the Motronic 3430 cc engine (replacing the 3453 cc) and rear suspension modifications as well as numerous other minor changes. In the US, 1984 saw the arrival of the optional 4-speed automatic transmission (replacing the 3-speed unit previously offered), upgraded wood trim above the glove compartment and on the ashtray (previously plastic in all US models), electrically adjustable power seats and larger Michelin TRX radials with special TRX wheels (later standard on all 1985–1987 735i/L7 models) on the 5-speed manual models.

The 745i Turbo was a special high-performance model offered in left-hand-drive North American and European markets between 1979 and 1986. It was originally fitted with a specially prepared 3.2 L (3205cc) i type-M30 six-cylinder gas engine and a turbocharger producing 252hp at 10 psi of boost with a Borg Warner K27 Turbocharger, BMW Intercooled engine code M102. In 1984 the engine grew to 3.4 L, and was known as the M106. These cars were all built with automatic transmissions (although there is documentation supporting how the ECU was modified at the factory to work with Getrag 5 speeds) and could be ordered with exotic options such as heated front and rear power reclining seats, auto-on aux interior gasoline fired heaters, leather covered cellular telephones, front and rear seat heaters, rear-armrest radio control, water buffalo hide upholstery, and burl wood trim. The water buffalo interior model was the Executive trim option, while the High Line trim package offered ivory leather interior trim including a leather dash board, sun visors, headliner, and other leather bits not offered on the Executive.

BMW designated this particular model as 745i instead of 732i Turbo due to the theoretical assumption that the turbocharged motors have about 1,4 times more power than naturally aspirated motors. Thus, 3,2-litre (3206cc) turbocharged motor has "power equivalent" of 4,5-litre (4494cc) motor without forced induction.

A 745i without turbocharger was built specifically for the South African market. The right-hand-drive version was not possible with the turbocharged motor due to the proximity of turbocharger in the right-hand side of engine bay. Instead, it was fitted with the detuned version of 286 hp (213 kW) dual-camshaft 24-valve M88/3 M1 Motorsport engine with a Bosch ML-Jetronic fuel injection system. This particular motor was also fitted to the first-generation M5 and M635CSi. A production run of 209 South African 745i was built from 1984 to 1986: 192 were built with automatic gearbox and 17 with 5-speed manual gearbox.

BMW South Africa ran one of these 745i models in Class A of the South African Modified Saloon Car Championship, the only BMW-Sanctioned motor sport application in the history of BMW 7-series cars.

Only the 733i, 735i, and L7 were offered in these markets. As usual, BMW sold only upscale versions in these markets, usually including leather upholstery, cruise control, wood trim, power windows, power sunroof, and other options as standard. North American versions were fitted with larger bumpers (to comply with the U.S. National Highway Traffic Safety Administration (NHTSA) standards), smaller sealed beam headlights, and various forms of emissions equipment that were not found on European-market cars. The engines used in these markets had lower-compression pistons and thus were less powerful than European-market versions. Some features such as ABS were available in markets outside North America before they were fitted on American models. Many turbocharged 745i models made their way into America during the height of the grey market in the mid-1980s.

The L7 was a more luxurious version of the 735i for the American market only. It was 154mm longer, featured special leather upholstery with leather dashboard and door padding (rather than wood trim), a power glass Moonroof. and a variety of optional features as standard. All L7 models were built with automatic transmissions and a standard driver's air bag. The L7 was the first BMW sold in North America with a driver's side airbag. 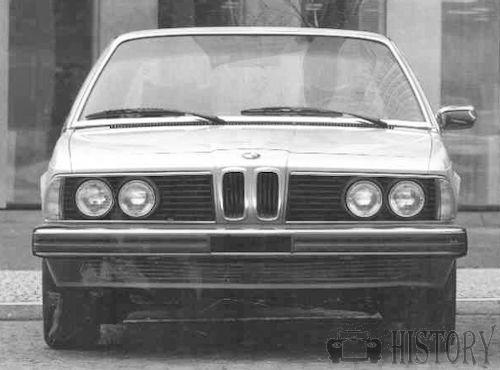