After almost 7 years in development since September 1979, in July 1986, BMW introduced the second generation of the 7 series, known internally as the E32. Aimed at the high end of the luxury market, the car offered some of the latest innovations in automotive technology, and (beginning in 1987) a new, top-of-the-line V12 engine. Some luxury options featured on the E32 included integrated telephone and fax machines, a wine cooler, double glazing, traction control system, and a system that automatically increased spring pressure on the windscreen wipers, to keep them firmly pressed on the glass at Motorway speeds. The E32 (750i) was the first car adhering to BMW's self-imposed speed limit of 250 km/h (155.37 mph).

The car was also available in a stretched version (indicated by an 'L' from German Lang, after the model number), in which case an extra 11.4 centimetres (4.5 in) of leg room was available to the rear passengers by stretching the rear doors, and the body at this point.

The styling has been described as classic, progressive and postmodern and is credited to then-chief stylist Ercole Spada and Hans Kerschbaum working under the guidance of then-chief designer Claus Luthe Design work began in late 1979, in which by 1983 1:1 scale models were presented and frozen in 1984 for 1986 production.

The BMW 750iL Highline was the top-of-the-line model of the E32, with lots of added luxury for the rear passengers like full leather, dual radio controls, dual climate control with coolbox mounted in the center console, electrically heated and adjustable rear seats, walnut veneer folding tables, two crystal glasses neatly placed in the coolbox, legrests, and sun shade all around the rear/side windows. Complete with independent heating and ventilation, it also added a second battery in the trunk and a second alternator to provide power for all these luxuries. The 'Highline' option package cost more than 20,000 DEM (€10,000 equivalent), and was only available on the 750iL, bringing the total price to well over twice that of a 'basic' 730i ('basic' to be taken in context).

The 767iL Goldfish was a single prototype of E32 car powered with V16 engine. It was conceived in 1987 and built by the end of 1988. Because of the length of the engine cooling system (radiator) was moved to the trunk and additional vents were added at the rear.

German tuning company Alpina was manufacturing 3 main models based on the E32 series cars. Those were B11 3.5 (3 engine versions), B11 4.0 and B12 5.0. In addition to tuned engines and suspension they were distinguishable by bodykit, pinstriping and trademark Alpina wheels.

The E32 7-series cars were offered with 5 gasoline engines.

In some countries (notably in the USA and UK), there were problems with the M60 engine because of excessive sulfur amount in gasoline, causing corrosion problems in its Nikasil cylinder block. The cylinder lining would quickly wear, causing the engine to lose compression, which caused rough idling and eventually the engine would fail to start. Engines were replaced under warranty; the problem was corrected by using a different material, Alusil.In the USA and UK sulfur rich fuel is being phased out. Nikasil engines are unlikely to be a problem today, as cars with affected engines are off the road or have received replacement engines. 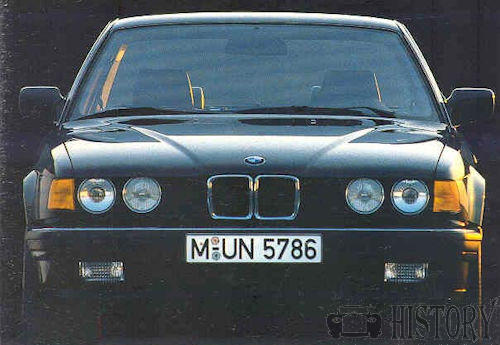