The BMW E38 model was the basis for the 1995 through 2001 BMW 7 Series automobiles. In early 1988, development began on the third generation 7-series codenamed "Entwicklung 99". From 1989 to 1991 styling work was done, when Boyke Boyer's concept design was chosen and further refined into production form with engineers until 1992. In August 1992, the final production design for the new 7-series was approved by the board for production. On April 27, 1993 German design patents were filed featuring a pre-production prototype as a design representation. Patents were later filed on October 27, 1993 in the United States. In early 1994, development concluded and in May 1994, the 1995 E38 BMW 7-Series was unveiled. Production started on February 17, 1994 on pilot production variants, with series production commencing in the second half of the year.

The E38 7 Series never had the factory DVD-ROM based Navigation system  (although upgrading to this system is a simple process) and rain-sensing wipers. Other features included an automatic climate control system with separate controls for the driver and passenger, a three-position memory system for the driver’s seat, safety-belt height, new steering wheel and outside mirrors. Front-seat side airbags and a Head Protection System (HPS) were also standard. The 750iL featured an all-leather interior with burl walnut trim, while the sport model featured Sports seats and "Vavona" wood trim. The continuous-motion Active Comfort Seat technology was introduced in 1998 to improve comfort and reduce fatigue for the driver and front passenger. 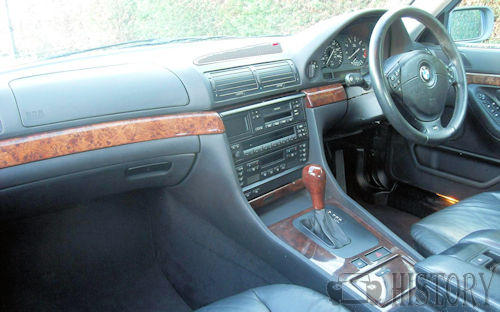 When the E38 was phased out in 2001 to make way for the new E65, sales of E38s increased noticeably in the car's final months of sales as people moved to buy the car before it was replaced for the 2002 model year. The E65's radical styling and iDrive were not initially well received by consumers, so used E38s increased in value as demand increased. Also contributing to the E38's continued popularity was its appearance in several films such as Tomorrow Never Dies, The Transporter, Bimmer and The Game. The E38 740i featured in the BMW Film Ambush, even though it was the only featured car in the series to be replaced the following year.

In 1997, BMW started to manufacture the L7 ultimate saloon nearly 5.40 metres in length. This automobile was designed for customers with the highest possible aspirations and catered for all forms of driving comfort. The L7 was fitted with every conceivable extra, including leather upholstery throughout. It was based on the BMW 750iL with a 12-cylinder engine although the BMW L7 was 25 cm longer after the B pillar. The top speed of the BMW L7 was 250 km/h. The L7 was individually manufactured in small batches until 2001 and was supplied as left-hand or right-hand drive.

899 examples were built. Target markets were the USA, Asia and Arabia.

Engine tuning companies such as Alpina, Dinan and Hartge have built both turbocharged and supercharged versions of the M73 V12 motor.

In the 18th James Bond feature film Tomorrow Never Dies, the sixteen E38 cars used during production were modified so they could be driven from the backseat. The car type is actually a BMW 740iL but they were re-badged as the 750iL. One survives today and can be seen at exhibition “TOP SECRET” at Museum Industriekultur, Nuremberg. Besides the 7 Series saloons, BMW also supplied a $14,000 R1200C motorcycle. BMW received the rights to use movie clips from the film in its multimillion-dollar campaign, and during the 1997 holiday season they offered a special promotion that included the R1200C with the purchase of the 750iL. 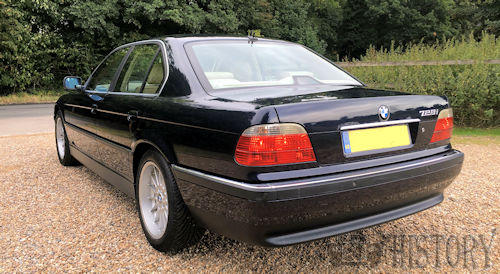