The BMW F30 series is the sixth generation of the BMW 3 Series range of compact executive cars. It is the successor to the E90 model and was unveiled by automaker BMW on October 14, 2011 in Munich, Germany. The world premier was broadcasted live over the internet through Facebook It was released as a 2012 model and has been on sale since early 2012. The F30 sedan was launched on February 11, 2012 by BMW Press. The car is also available with different body styles.

The BMW 320d Efficient Dynamics is the most widely used vehicle in the London 2012 Olympics due to BMW's official partnership New for 2012 is the introduction of a four-cylinder engine for North America since the 318i of the late 1990s The new 3 Series is also the first to introduce the new BMW face, with flat headlights reaching the BMW kidney grille.

The vehicle was unveiled in 2012 Geneva Motor Show, followed by 2012 Paris Motor Show.

The touring was unveiled in 21st Auto Mobil International Leipzig 2012. It is designated as F31.

The vehicle was unveiled in the 83rd Geneva International Motor Show 2013. Early models included 320i, 328i, 335i, 318d, 320d. All launch models include six-speed manual gearbox as standard, and eight-speed automatic as an option for all engine variants. Both gearboxes link up with the fuel-saving Auto Start-Stop function.

It is a long wheelbase version of BMW 3 Series sedan for China market (designated as F35). The wheelbase is increased by 11 centimetres (4.3 in) which increases rear knee room by 90 millimetres (3.5 in). This vehicle was produced in BMW's Shenyang production plant.

The BMW ActiveHybrid 3 was unveiled at the North American International Auto Show in January 2012,

BMW 328i Sedan is a camouflaged task vehicle.

The vehicles were unveiled in RETTmobil 2012.

It is a version of 3 Series Touring built for use by the federal and regional police. Optional features include additional warning devices, additional LED identification lights at the rear, radio, a flashing blue light, optional control of a signal installation via the operating system BMW iDrive supplied as standard.

The vehicles were unveiled in General Police Equipment Exhibition & Conference 2012.

B3 Bi-Turbo Saloon and Touring were unveiled in 2013 Geneva Motor Show.

Designed by Christopher Weil under design chief Adrian Van Hooydonk (into March 2009), the new BMW 3 Series has grown in all dimensions compared to its predecessor.The styling is similar to previous generations with a sweeping bonnet, short front overhang, and long wheelbase typical of previous generation BMW. The front and back of the BMW 3 Series is now wider (+ 34/77 mm at the front/rear) with a slightly forward-slanting BMW kidney grille. The rectangular headlights extend up to the frame of the kidney grille merging the headlight and grille adding further emphasis to a more broader stance. Exterior mirrors also have integrated turn signal lights. The rear lights return to the traditional BMW L-shaped design positioned at the outer edge of the back end. The interior continues BMW design by angling the cockpit towards the driver by seven degrees. In the driver's area all the lines converge on a single point behind the wheel. Positioned on the horizontally-structured instrument panel is the freestanding iDrive monitor. Large drink holders are now integrated into the centre console in front of the gearshift lever. The BMW 3 Series can also be ordered with three distinct design variants. The Sport Line, Luxury Line, and Modern Line features different exterior and interior design elements for each line.

The distinguishing element in the sport line is the high-gloss black that gives a more dynamic appearance to the BMW 3 Series. Eight black kidney grille slats in a chrome-colored surround gives the front end of the car a sporty look. Black inserts in the front apron make the air intake and wheel arches appear larger. High-gloss black painted exterior mirrors and B-pillar and window guide add to the sportier look. Finally a black trim strip on the lower crease underlines the width-enhancing effect of the rear styling along with a black tailpipe. The sporty interior ambiance is expressed by contrasting red and black accents. Red trim rings, red scales in the dials, red stitching on the steering wheel underline the ambiance of the cockpit. The ignition key is also specially identified by its black finish and red detailing.

Satinated aluminum underlines the contemporary character of the Modern Line. The BMW kidney grille, with 11 satinated aluminum slats, and double trim strips for the air intakes in the same color gives the front end a contemporary look. Satinated aluminum is also used on the B-pillar and window guide at the front and rear. The interior has a lighter characteristic with an oyster-colored instrument cluster with chronoscale. The interior utilizes a three-dimensional wood surface that is more tactile. The ignition key is identified by its oyster finish and silver detailing.

The Luxury Line is defined by high-gloss chrome elements that portrays an elegant and exclusive appeal. The BMW kidney grille with 11 chrome slats, two slightly offset chrome trim strips in the front apron air intakes, and high-gloss chrome trim strip running horizontally above the air scoop gives a more striking appearance. The window frame and weather strip are also in chrome. The rear has a high-gloss chrome strip that extends across the full width of the rear apron along with a chrome tailpipe. Inside the cockpit chrome surrounds the radio and air conditioning unit. The ignition key is identified by its black finish and chrome detailing.

Also for the first time, the 3 Series features five different "lines", or trim levels. Each "line" includes its own unique details:

The Base/SE model offers standard equipment and aluminum interior trim. The keyfob for the car is black with an aluminum accent. This allows the owner to customize his or her own 3 Series without picking a package.

The Luxury Line offers wood interior trim, luxury leather seating surfaces, and the keyfob for the car is black-colored accent.

Will feature interior and exterior features found on BMW M models. The M package is ordered since May 2012. Exclusively for the M package, the vehicle can be delivered in Estoril blue color. The front and rear apron is quite different from the other models. The technical equipment features a sports suspension with 10mm lowering count (also available separately), and the optional "M-sport brake" with blue calipers.

The BMW ConnectedDrive is a range of technology to help with comfort, information, entertainment, and safety. Technology such as help with safety and information BMW Parking Assist, Surround View, Active Cruise Control with Stop & Go function, and Speed Limit Info with No Passing Info Display. BMW Parking Assist helps driver maneuver into parking spaces automatically through the use of camera and parking sensors. Active Cruise Control with Stop & Go function not only maintains the desired distance to the vehicle in front but can slow the car down to a standstill in heavy traffic. Finally, Speed Limit Info helps alert drivers to current speed limit on the road by continuously scanning road-signs with the integrated camera in the rear-view mirror.

Other passenger comfort innovation includes Real-Time Traffic Information (RTTI), information and office services, and Google Maps. BMW Connected Drive also utilizes external mobile phones and music players. Internet-based services such as weather, news, calendar entries, and text-based messages can be viewed on the iDrive operating system and read out via text to speech function. BMW Connected app also allows full in-car use of web radio as well as social networks such as Facebook and Twitter. Finally the "My BMW Remote" app allows drivers to open and close the car and control heating from the outside. A number of driver assistance system also adds to the safety of the BMW 3 Series. Systems like full color head-up display, lane change warning system, and lane departure warning including collision warning.

The increased efficiency of the BMW 3 Series is accomplished through the inclusion of auto start-stop, brake energy regeneration, and ECO PRO mode technology. Auto start-stop automatically switches off the engine during short stops at traffic lights or in stationary traffic to not waste fuel. Brake energy regeneration generates power for the vehicle electrical system during braking and overrun. When the engine is under load, the alternator can be disengaged. Finally, ECO PRO mode can modify powertrain management and heating and air conditioning to optimum efficiency, reducing fuel consumption by as much as 20 per cent. Due to customer demands, the auto start-stop mode can be disabled by the dealership or by pressing a disable button next to the start button.

Notable downgrades to the new 3-series from its E90 predecessor include the deletion of LED turn signals in both the headlight and tail light clusters (with the return to traditional bulbs), as well as the replacement of non-intrusive, articulated gas-strut trunk hinges with cheaper, obstructive gooseneck hinges.

Enthusiast magazine reviews were also less than stellar. In their November, 2012, issue, Car and Driver wrote, "We're convinced that the E90 would handily win a comparison test against the F30." In the April, 2012, issue they noted an increase in weight, versus the BMW's suggestion of a loss: "weight gain from our last E90 335i test car is 77 pounds, at least some of which must be from the new optional 19-inch wheels ($900) . . . ." Furthermore, acceleration suffered in comparison to the E90 as well, "A slower 5-to-60 time of 5.9 seconds—we expected mid-fives for that—also indicated that something may have been amiss."

The magazine closed the generally ambivalent article with, "At some point, BMW will have to take a bigger step to move forward or risk falling behind its competitors—but not just yet 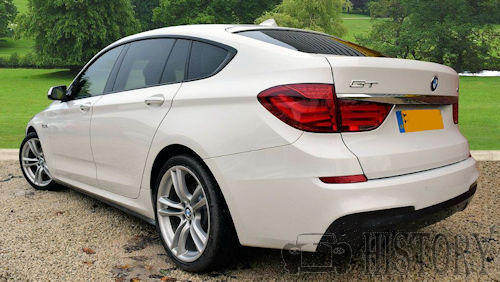