The BMW E46 is the fourth generation of the 3 Series compact executive cars produced by BMW, produced from 1998 when it succeeded the BMW E36.

The E46 was released in 1998 to worldwide markets in the sedan body style. In 1999, a coupé and touring body style became available to all markets, and the sedan was released in the United States. A convertible and hatchback body style was released in 2000, the latter only for Europe, South Africa, Australia and New Zealand. The E46 experienced enormous success in all markets and was widely considered the performance benchmark of its class. The record selling year for the E46 chassis was 2002, when 561,249 vehicles were sold worldwide. The main competitors during the E46's production run were the Alfa Romeo 156, Audi A4, Infiniti G, Lexus IS, Mercedes-Benz C-Class and the Rover 75/MG ZT.

BMW M GmbH produced a high-performance variant of the E46 chassis, designated the M3. This version had a larger, more powerful engine, sportier suspension, a limited slip differential, and various aesthetic modifications. The M3 was released in 2001 and was available only in the coupé and convertible body style. It was offered with two transmissions; a standard 6-speed manual, or an optional sequential manual gearbox.

The E46 was developed as an evolutionary replacement for the BMW E36 chassis. In late 1995, the general exterior design of the E46 by Erik Goplen was chosen and as a result DesignworksUSA was contracted by BMW to work alongside BMW Group's in-house design team to create the exterior body work in February 1996. Based on the E36 body shell, the design team put an emphasis on improving aerodynamics and increasing the car's aggressive stance.Design patents were filed in Germany on July 16, 1997 and in the US on January 16, 1998

Since the start of production, the entire in-car entertainment system (Radio Function, Navigation System, Television and Telecommunications systems) is based on a very flexible automotive computer system. As a result the E46 models can all be easily upgraded with the newest BMW technologies including BMW's Bluetooth System, the DVD based Navigation system, as well as BMW's CD changers that play MP3s

An emphasis was put on reducing unsprung weight and increasing structural rigidity rather than increasing power output: the highest displacement model at release, the E46 328, had only 3 horsepower more than the E36 328.To counter this small power increase, the body shell of the E46 was claimed by BMW to be 70% more rigid than the E36's, and aluminum suspension components were used increasingly in order to decrease unsprung weight. In tune with BMW's core values the E46 was released with a front engined rear-wheel drive layout with 50/50 weight distribution. This balance allows for optimal handling in regards to the drive train layout.

Sold in many places, including the United Kingdom, Germany, Greece, Canada, Australia and Ireland. It was powered by a 2.2-liter in-line six-cylinder engine making 170 hp (127 kW). It was the base model in Romania, Canada, Australia, where it would be succeeded by the 323i.

The 323 was one of the first E46 models available for purchase, 1998 for the sedan (excluding North American markets) and 1999 for the coupe (and sedan in North American markets). It was powered by BMW's 2.5 L M52 engine designated M52TUB25. The M52 engine was previously used in the E36; however, this 2.5 L version added dual VANOS, BMW's mechanically continuous variable valve timing system. This improved low end torque and fuel economy over the M52B25 used in the E36 323. The E46 323, despite having a 2.5L engine, was designated "323" and not "325", to increase the apparent spread between it and the correctly numbered 328 to appeal to BMW enthusiasts.

The 325 took over from the market position of the 323 and uses the same 2.5 L I6 engine, however the 325's engine has improved double-VANOS and fully dual pipe exhaust system. The European version makes 192 hp (143 kW), while the U.S./Canadian version had a catalytic converter installed which reduces the output to 184 hp (137 kW) .

The "i" badging originally indicated that the car had a fuel injection engine (Petrol) which first appeared in the E3/E9 and E21 chassis. As electronic fuel injection replaced carburetors the "i" badge was reused to indicate that the engine had an inline cylinder configuration. BMW is one of the last auto manufacturers still producing cars with this engine configuration.

The AWD models were well received by reviewers for giving customers in severe winter climates the option of an AWD 3-series. At the same time, the xi was criticized for its added weight, slower acceleration, decreased gas mileage, softer suspension, and poor original equipment tires.

The xi models have a permanent front/rear 38:62 torque split which differs from the E46's successor, the E9X, which incorporated BMW's new xDrive platform. Both the front and rear differentials in the E46 xi are open differentials which are aided by DSC (Dynamic Stability Control) to control wheel spin and oversteer/understeer.

The xi models were only produced in left-hand drive, and as such were not sold in RHD markets such as the United Kingdom.

BMW tuner Alpina produced a specialist version of the 3 Series dubbed the B3S 3.3. one version were produced, taken from the standard production line.

The "d" indicates that the car has a diesel powered engine.

The "Ci" indicates that the car is a coupe with a petrol powered engine.

The "Cd" indicates that the car is a coupe with a diesel powered engine.

The "Cic" indicates that the car is a 2-door convertible with a petrol-powered engine. These cars were badged Ci.

The "T" in "iT" stands for "Touring", the BMW nomenclature for a 4-door wagon. It has a petrol powered engine. These cars are just badged as "i".

The 'ti' badge on the E46 compact stands for 'Touring International' This harks back to the BMW 2002 tii touring. 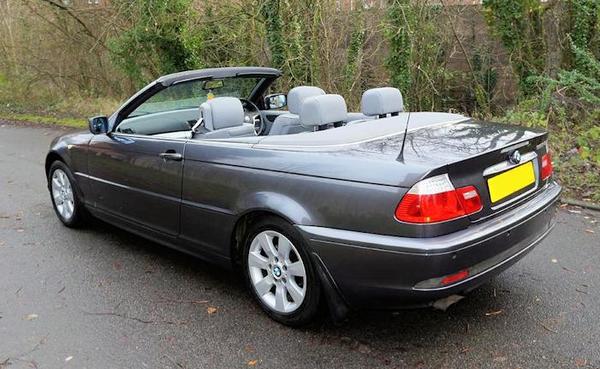