The E46 M3, first introduced in October 2000, appeared worldwide with the new 3.2 L S54 M-tuned engine. At the time of the car's introduction, this engine had the highest specific output naturally aspirated of any engine ever made by BMW (except in the McLaren F1), producing 343 horsepower (256 kW) and 365 N·m (269 lb·ft).

It was only available in coupe and convertible bodies as the saloon version was dropped.

The E46 M3 was offered with a standard 6-speed Getrag transmission, but optionally came with a SMG drivelogic transmission (also known as the SMG II). This is the standard 6-speed Getrag transmission with an electrohydraulically actuated clutch (no clutch pedal). Shifts are made via the SMG gear knob or the steering wheel mounted paddle shifters. The engine had a redline of 8,000 rpm. As with most M engines, the S54 again had 6 independent throttle bodies and this time electronically operated throttles (drive-by-wire throttle with no cable).

In the U.S., the E46 M3 came with similar engine output as the European version, unlike in the E36, whose engine was derived from the M50/52 series engine. Power was now at 333 bhp (248 kW; 338 PS) due to close-coupled catalytic converters closer to the engine exhaust ports. In 2009, Road and Track magazine announced the 2006 M3 with the SMG transmission as its favorite sports car of all time. 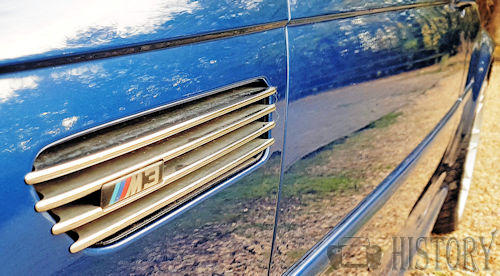 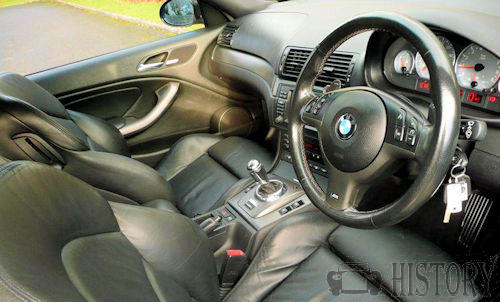 Rivals such as Porsche pointed out that this car was more of a prototype as no V8 engine was available in the road-going BMW E46, which is in violation of the spirit of Gran Turismo. In 2001, ALMS regulations stated that cars must be for sale on two continents within twelve months of the rules being issued. To fulfill this rule, BMW put 10 road going GTRs on sale after the 2001 season, for 250,000 euros (then $218,000) each.

The ALMS rules were altered for 2002 to state that 100 cars and 1,000 engines must be built for the car to qualify without penalties. Although BMW could have raced the V8 with the new weight and power penalties under these new regulations, they chose to pull out of the ALMS, effectively ending the short-lived M3 GTR's career.

Two Schnitzer Motorsport GTR cars saw a comeback in 2003 at the 24 Hours Nürburgring, winning 1–2 in 2004 and 2005, as well as entries in the 24 Hours Spa. Onboard coverage recorded in 2004 Hans-Joachim Stuck, Pedro Lamy, Jörg Müller and Dirk Müller on the Nürburgring and Spa-Francorchamps.

Private teams (Scheid, Getrag, etc.) also have fit 3,997 cc BMW V8 engines into the E46 body to race on the Nürburgring, winning some VLN races in the last years.

The BMW M3 CSL (Coupé Sport Leichtbau) was a limited edition version of the M3, with only 1,400 cars being produced for its 2004 model year run.The CSL was never released into the North American market, and was only available in two colours – Silver Grey Metallic and Black Sapphire Metallic.

As its name suggests, an emphasis was put on reducing weight. The M3 CSL has a curb weight of 1,385 kg (3,050 lb), 110 kg (240 lb) lighter than the regular M3.The CSL features many weight saving technologies taken from BMW's Formula One racing applications A large proportion of the M3's sound insulation has been removed, along with electric seats and navigation systems Air conditioning and stereo systems could be retrofitted free of cost, but were not available standard. The CSL's unique body pieces are all crafted from carbon fiber reinforced polymer. Glass-reinforced plastics are used throughout structural points in the car. The standard rear window was replaced with one made from thinner glass. Although the CSL loses a considerable amount of curb weight from its original version, the focus was put on strategically reducing or moving the weight in the car rather than the raw amount of weight that could be lost. This is to retain the ideal 50:50 weight distribution characteristics the E46 has. For example, the roof is constructed from carbon fiber reinforced plastic While this only reduces the curb weight of the car by 7 kg (15 lb), it lowers the center of gravity of the car and decreases body flex.

Although the M3 CSL was never exported to the United States, for 2005 BMW introduced an M3 Competition Package in both Europe and the US (a.k.a. CS/Club Sport in the UK): a $4,000 option which offered a number of upgrades taken from M3 CSL. The package includes: 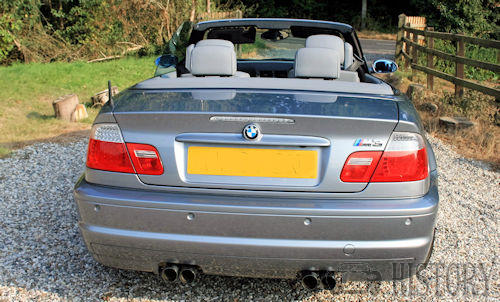